On March 12th a feature article titled “Why has the Syrian war lasted 10 years?” appeared on the BBC News website’s ‘Middle East’ page. 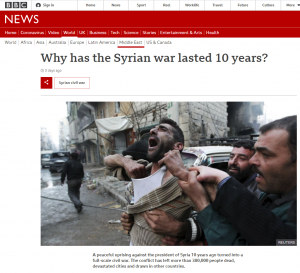 Under the sub-heading “Who’s involved?” readers find the following:

“Iran is believed to have deployed hundreds of troops and spent billions of dollars to help Mr Assad.

Anyone familiar with the scale of the Iranian military intervention in Syria will surely raise an eyebrow at that highlighted unnecessary qualification. Those who have followed BBC coverage of the civil war in Syria would be somewhat less surprised, seeing as the corporation has serially downplayed Iran’s activities there over the years:

THE BBC, IRAN AND FAUX OBJECTIVITY

A map appearing later in the feature under the title “Who controls what in Syria?” makes no mention of areas and border crossings under the control of Iran, Hizballah or other Iranian proxy Shia militias.

Long-time BBC watchers would likewise be unsurprised by the BBC’s inclusion of Israel under the same sub-heading “Who’s involved?”.

“Israel, meanwhile, has been so concerned by what it calls Iran’s “military entrenchment” in Syria and shipments of Iranian weapons to Hezbollah and other Shia militias that it has conducted air strikes with increasing frequency in an attempt to thwart them.” [emphasis added]

The erroneous portrayal of Israel as being “involved” in the civil war in Syria is also not novel.

As we have noted on several occasions in the past:

“The corporation’s journalists appear to be incapable of understanding that Israeli strikes on Iranian weapons bound for Hizballah or Israeli responses to cross-border fire from Syria do not make Israel a ‘player’ in the Syrian civil war but are in fact related to the Iranian and Hizballah aggression against Israel that long predates that conflict.”

Although the BBC’s feature includes references to injured civilians and the need for humanitarian assistance, readers see no mention of the medical treatment and humanitarian aid provided by Israel for over five of the war’s ten years.

The BBC initially largely ignored that story but later produced a handful of related reports.

AT LAST: AN ACCURATE AND IMPARTIAL BBC REPORT ON SYRIAN PATIENTS IN ISRAEL

This BBC feature about the civil war in Syria demonstrates how the corporation continues to adhere to the often unhelpful framing that it has been promoting for a decade.