The July 11th edition of the BBC One regional programme ‘Politics North West’ (available in the UK here) included a segment, from around 23 minutes in, about the abuse of female Muslim Labour politicians by male Muslim Labour politicians. Joining the presenter Annabel Tiffin in that discussion were Kim Johnson, Labour MP for Liverpool Riverside, and Chris Green, Conservative MP for Bolton West. 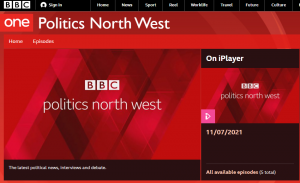 Johnson: “The Labour Party acknowledges when we have an issue with racism. We did have a problem with antisemitism.  We do have an action plan. We have improved our position on that. However, Baroness Warsi…has called out Islamophobia in the Tory Party…[but] nothing has happened there. So, at least we acknowledge and deal with the issues within our party.”

Tiffin: “Chris, just respond to that.”

Green: “There are always concerns, and they have to be dealt with, and this party (Tories) obviously is, but if you look here at the targeting of Muslim women. If you look at the Batley and Spen by-election, the targeting of Hindus, if you look at Liverpool and the clearing out of Louise Ellman and other Jewish Labour members…Labour is the only party other than the British National Party to be found guilty of racism by the EHRC.”

Johnson: “I will, because Tory MP Lee Anderson was called out for racism against Gypsy Traveller MPs…but he got a slap on the hand. And, just to say, Louise Ellman was not forced out. She took decision to resign from the party after 22 years as a Labour MP.” [emphasis added]

That highlighted claim from Kim Johnson was not challenged by the BBC presenter Annabel Tiffin, who stated “we’re going to move on”.

One would have expected the BBC’s presenter to recall that less than two years ago the BBC reported that story in a report headlined “Louise Ellman: MP quits Labour over anti-Semitism concerns” which included a link to her resignation letter. 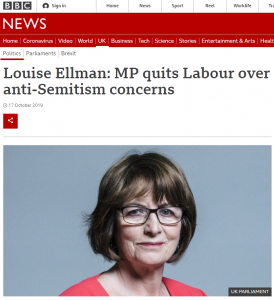 The Liverpool Riverside MP said in a letter she had been “deeply troubled” by the “growth of anti-Semitism” in Labour in recent years.

Dame Louise, who is Jewish, has been a party member for 55 years but said she “can no longer advocate voting Labour when it risks Corbyn becoming PM”.”

The background to the resignation of Louise Ellman and others from the Labour party is provided by David Hirsh in this film with Ellman explaining her decision from 11:09.

As noted at the Jewish News, in October 2020 Labour leader Keir Starmer said:

” To the people driven out of our Party, the Jewish Members driven out of Parliament, including Louise Ellman and Luciana Berger. And to the members of Labour Party staff who spoke out, I want to say this: I know how hard these last few years have been for you.”

Especially given the BBC’s generally poor record of reporting on antisemitism within the Labour party, it is highly disconcerting to see a BBC presenter fail to challenge an obvious attempt to whitewash that topic just months after the publication of the findings of the EHRC investigation into the issue.