To borrow upon, and take considerable liberties with, a quote by a famous American, there are only ‘three’ certainties in life: death, taxes…and the fawning, uncritical treatment of Palestinian anti-Zionist activists by mainstream media outlets.

An article in the Financial Times by their Cairo and North Africa Correspondent Heba Selah gives away its framing of east Jerusalem activist Mohammed al-Kurd in the photo, headline and strap line. 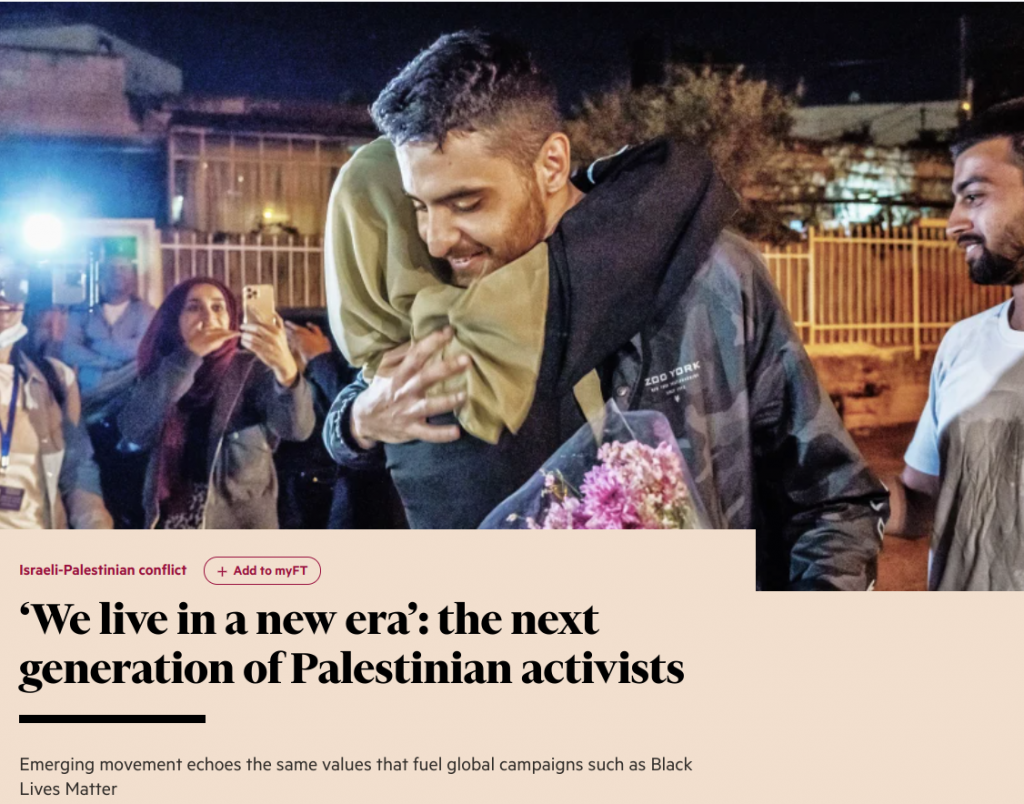 Our protagonist is smiling, and embracing a woman who seems to have just given him flowers.

We’re told he’s in the vanguard of a new generation of Palestinian activists who echo “the same values that fuel global campaigns such as Black Lives Matter” – a comparison which evokes the increasingly popular narrative, though cynical and completely ahistorical, that views the conflict through an Americanized racial lens.  But, more on that later.

The Financial Times correspondent introduces Kurd as “a 23-year-old Palestinian writer and hero to many young people around the region” who “lambasts Israeli repression as he points to stun grenades fired by police the night before”. Kurd, we’re then told, “is fighting Israeli settlers’ attempts to evict him from his home in the Sheikh Jarrah neighbourhood”.

Of course, no information is provided to inform readers that the court battle has been going on for decades, centers around the Palestinian tenants’ refusal to pay rent, and that the tenants have reportedly refused compromises that would have given them protected status and allowed them to continue living in the homes.

The FT article continues, with rhetoric that was featured in the strap line:

Kurd and his twin sister Muna are part of a new Palestinian generation, whose calls for justice echo the same values of equality that fuel global campaigns such as Black Lives Matter. The twins, who have a huge social media following, post regularly about their fight to save their home.

In addition to the fact that the Black Lives Matter organisation (as opposed to the general movement for Black equal rights) has been compromised by antisemitism, the comparison between BLM and the Israeli-Palestinian issue is intellectually unserious, as the conflict has never been about race, equality or Palestinian rights as the words are understood in popular Western discourse.

Rather, to the degree that it has been around rights, equality or race at all, it’s about the Palestinians refusal to recognize the Jewish right of self-determination, the Israeli demand that Jewish nationalism be granted equality with other expressions of nationalism, and the fact that anti-Jewish racism within Palestinian society is a main driver of the conflict.

As far as Kurd’s social media presence, the FT journalist fails to note that he has, at times, shared false, incendiary and hateful content to his “huge” Twitter following.

Just in the last few weeks of tweets we scrolled through, he’s tweeted that all Jewish settlers are “psychotic”, characterised Zionism as inherently genocidal, praised an assassinated PFLP terrorist, falsely claimed that the IDF “tortures” Palestinian children, and retweeted a video of the late American radical Kwame Ture (aka, Stokely Carmichael) referring to Zionism as a “satanic movement” 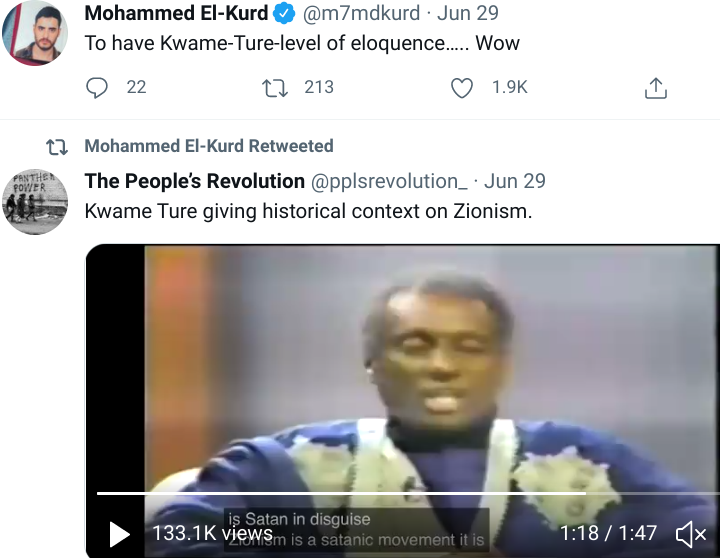 Ture is also well-known for saying that “the only good Zionist is a dead Zionist”.

Here Kurd is on MSNBC appearing to say that all Israelis are terrorists, a video he retweeted.

I was asked about the new Israeli government 🙃 pic.twitter.com/6lCUMqm0jn

It’s unclear if the MSNBC journalist, Ayman Mohyeldin, challenged Kurd, but just imagine for a second the reaction if a prominent Zionist activist would say, about Palestinians, that “they are all terrorists”.

Activists have said the new movement, which is leaderless and without a defined vision of the future beyond securing equality and justice for all Palestinians, gained momentum after May’s conflict in Gaza.

Large protests against Israel’s bombardment of Gaza swept through not only the West Bank but also mixed Arab and Jewish towns in Israel.

The FT journalist omits the fact that these “protests” in mixed Israeli cites had little to do with “equality”, and included an unprecedented number of Arab-Israeli attacks on Jewish Israelis – racial violence that targeted Jews as Jews.

Additionally, throughout the article, the specious claim – which has become popular within the media – that Palestinians (Arab-Israelis, Gazans and West Bank Palestinians) are, following the war, now united is promoted.  What are they united behind? An anti-Zionist solution:

…many activists have given up on the two-state solution, which is still nominally the goal of international diplomacy, even though the peace process has been moribund for years.

Sanah, who lives in the northern Israeli city of Haifa, described her own vision of one state spanning Israel and the occupied territories. She said it would mean “an end to Israeli settler colonialism” and the dismantling of restrictions on movement that blight the lives of Palestinians in the West Bank. “It’s not that [the Israelis] have to leave [the country],” she said. “We want the elimination of the structures that govern this place and to change them to something more just, [including] removing checkpoints and walls [in the West Bank] that are the physical manifestations of colonialism and also dismantling the institutions which sustain racism.”

So, Jews, in this scenario, wouldn’t “have to leave” their country, but, would merely have to hand over the reigns of the state to a hostile Palestinian majority.

What’s also notable about the piece is the complete absence of the Israeli view of these activists’ anti-Zionist vision.  In fact, the only Jewish Israeli quoted is the leader of a radical left Israeli organisation, who just happens to provide a quote consistent with the desired narrative: that Zionism is an ideology based on the racist idea of Jewish “privilege”

For many, this desire is unrealistic at best. “Jews would have to give up their entire privileges to have one democratic state . . . I don’t see that happening,” said Yehuda Shaul, co-founder of Breaking the Silence, an organisation of veteran Israeli soldiers opposed to the occupation.

Then, the increasingly common antisemitic trope of “Jewish supremacism” is uncritically cited:

“They give us more privileges [than Palestinians in the occupied territories] because we are citizens here, but we are not really equal,” said Amir Toumie, 27, a graduate student from Haifa. “The whole state is built on Jewish supremacy. By law, if I marry a Palestinian from the West Bank, she can’t get citizenship or move into Israel.”

The FT journalist fails to explain that the law in question (adopted in 2003 to prevent the problem of Palestinians marrying Israelis in order to carry out terrorist attacks) applies to both Jewish and Arab citizens – an inconvenient fact in the context of the desired ‘racist Israel’ framing.

Let’s remember that the article is putatively straight news, but clearly more resembles an op-ed in its fawning profile of the Palestinian activists featured.

Moreover, the only thing exceptional in the context of the article’s lack of even a trace of critical scrutiny over the claims of Palestinian activists is that we’ve reached a point where such biased, advocacy-driven coverage of the conflict – in clear contravention to journalistic norms – is increasingly the norm, and not the exception.