The BBC Radio 4 programme ‘Analysis’ self-portrays as a “Programme examining the ideas and forces which shape public policy in Britain and abroad, presented by distinguished writers, journalists and academics”.

The July 5th edition of that twenty-eight-minute programme was called ‘Stalemate: Israel and the Palestinians after Gaza’ and according to its webpage, it will remain available online for over a year. Its synopsis provides a list of contributors and their affiliations which is more extensive than the information given to those who listened to the programme directly on Radio 4. 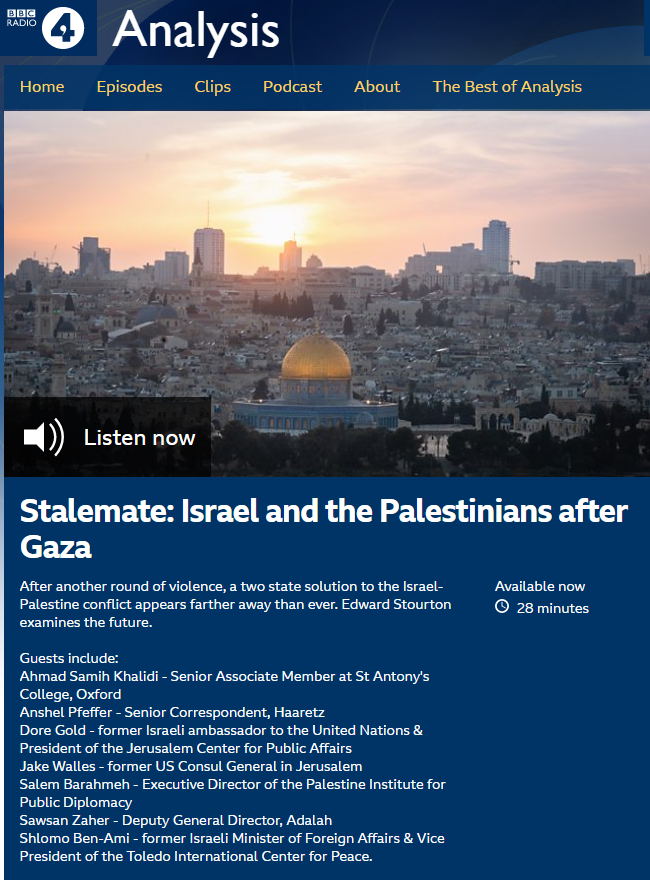 Around two minutes into the programme, presenter Edward Stourton describes its supposed aim: [emphasis in italics in the original, emphasis in bold added]

Stourton: “In this programme we’re going to explore how Israel and the Palestinians reached a place where there’s more talk about a new apartheid than a peace process. Politicians and activists on both sides in this long conflict now seem perilously divided and we’re going to explore what that might mean for the long-term future of the region. Could it even – and we’re not the only people asking this question – threaten the very foundations of the State of Israel? And when will the current troubled status quo, already punctuated by violence, turn critical?”

Any serious and objective examination of the reasons for the failure of past ‘peace processes’ would of course include discussion about the effect that the Oslo Accords’ parachuting of Arafat and the PLO into the Gaza Strip and Judea & Samaria had on the chances for peace. It would relate to the predictable corruption that has dogged the Palestinian Authority since its creation and Arafat’s decision to launch the terror war known as the second Intifada.

Such a discussion would be obliged to note the bitter rifts between Palestinian factions that agreed to the Oslo Accords and those that reject the concept outright. It would examine the effects of the decade and a half-long Hamas-Fatah split and ask why Hamas won elections in 2006 and looked likely to beat Fatah again in the elections scheduled for May 2021, but cancelled by Mahmoud Abbas, despite – or perhaps because of – the fact that it rejects any ‘peace process’ and the existence of the Jewish state.

No such topics however made it into this Radio 4 programme which conforms to the long BBC tradition of presenting Palestinians as agency-free victims of all-powerful Israel. The very transparent aim of Stourton’s ‘explorations’ is to convince the listener that there is no viable peace process because of Israel and that if there is no peace process, Israel is becoming an apartheid state.

That messaging is apparent from the programme’s first moments when, after a recording of shouting in Hebrew, Stourton opens:

Stourton: “Even by the famously robust standards of Israel’s parliament, this session last month was unusually raucous and bitter. The question under consideration was raw: is Israel becoming an apartheid state like the old South Africa? It’s a shocking idea to many Israelis – the shouting you can hear comes form an MP from the Religious Zionist party – but it’s gaining more and more currency among critics of the way Israel treats Palestinians.”

The event concerned took place on June 22nd and it was not a “session” of “Israel’s parliament” but an event on Knesset premises organised by two MKs – Aida Touma-Sliman of the Joint List and Mossi Raz of Meretz. Among the NGOs participating in the event was Human Rights Watch, which in April published a report promoting the smear of apartheid in Israel that was uncritically promoted by BBC Radio 4.

Listeners next hear the first of several unidentified voices (a particularly unhelpful practice often employed by BBC radio producers) claim that “the system” in Israel is apartheid according to “a legal textbook”. Stourton and another anonymous contributor describe the Knesset event as having been “sponsored” by the Meretz party rather than one Meretz MK and the involvement of the other MK is ignored because Stourton’s aim is to persuade listeners that “underline[s] the fragility” of the coalition government.

Stourton: “The Oslo Accords back in the mid-1990s, the Wye River memorandum that followed and the Camp David summit: all of them were based on the premise that the long-term solution to the conflict between Israel and the Palestinians lay in the creation of two states. Even the borders between those states were broadly agreed by many. A new Palestine would be built in the lands Israel conquered during the 1967 Six Day War. In return, Palestinians would accept the reality of the Israeli state founded in 1948.”

Factions such as Hamas and the PIJ of course have never accepted “the reality” of Israel and Fatah also refuses to recognise Israel as the Jewish state. Given Stourton’s misrepresentation of the issue, it is unsurprising that this programme made no effort to examine the question of how that fact – and the international community’s failure to deal with it – has affected the ‘peace process’. Indeed listeners then hear (from 03:51) former PA advisor Ahmad Samih Khalidi suggest that the Palestinians have some sort of claim to territory they never controlled while erasing the context of the attacks on Israel by Arab armies in both 1948 and 1967.

Erasing the second Intifada from the picture and ignoring Israel’s 2005 disengagement from the Gaza Strip and parts of Samaria, Stourton goes on:

Stourton: “The process failed in Palestinian eyes because it never got them anywhere near that promised new Palestine. In fact the younger generation of Palestinians believe that years of negotiation actually took them in the opposite direction because Israel tightened its grip on the occupied territories. Salem Barahmeh is the executive director of the Palestine Institute for Public Diplomacy.”

Listeners heard no explanation of that organisation’s agenda or the fact that Salem Barahmeh is also associated with Al Shabaka.

Barahmeh: “I am now the third generation that grew up in Palestine that doesn’t know what it means to be a free human being and I think that’s the crux of the issue. If you look at Palestinian society, the majority of it is under 30 and we grew up under this Oslo era that promised the two-state solution and a Palestinian state and what we got in return wasn’t the state. We got entrenched Israeli annexation, settlements and these discriminatory policies and occupation etcetera.”

Stourton makes no effort to clarify to listeners that no “annexation” has taken place since the “Oslo era”. At 06:45 Stourton tells listeners that “Hamas won an election in Gaza” in 2006 rather than elections for the PLC. His unhelpful portrayal of Hamas’ increased campaign of terror against Israelis after its coup in the Gaza Strip is confined to one sentence:

Stourton: “There have been repeated conflicts involving Gaza in the years since.”

Later on Stourton tells listeners that:

Stourton: “The way the relationship between Israel and the Palestinians has been knocked down the agenda in Washington and other Western capitals is no accident. Benjamin Netanyahu, the longest-serving prime minister in Israel’s history and perhaps the most influential since David Ben Gurion, wanted things that way.”

Backing up that claim is Anshel Pfeffer, who apparently missed the news about 4,500 missile attacks on Israel in eleven days in May:

Pfeffer: “…with the exception of these short bursts of violence like we saw in Gaza in May when the world does pay attention, most of the time the world has stopped paying attention to this conflict.”

Anyone familiar with the UN’s obsession with Israel, the ICC investigation or even just the amount of media coverage on the topic would surely question Pfeffer’s assessment.

The remainder of this programme will be discussed in part two of this post.