Previously we looked at how the BBC News website and BBC World Service radio failed to inform their audiences that a company they portrayed exclusively as Israeli is in fact majority owned by a London-based firm:

The same BBC departments and an additional one continued to promote that framing in subsequent reports.

Listeners to BBC Radio 4’s ‘Today’ programme on July 19th heard a news bulletin (from 2:37:18 here) in which they were informed that: [emphasis in italics in the original, emphasis in bold added] 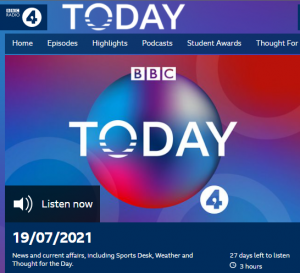 “A data leak suggests that thousands of activists, politicians and journalists may have been monitored using mobile phone spyware designed to target criminals and terrorists. The Israeli company behind the technology denies it’s been used in this way.”

Immediately after that news bulletin (from 2:37:43), presenter Mishal Husain introduced an item that included interviews with the BBC’s Gordon Corera and Agnes Callamard of Amnesty International. Once again BBC audiences were not informed of the relevant fact that in 2019 that political NGO had filed a lawsuit against NSO which it later lost.

Husain: “…journalists including the editor of the Financial Times, lawyers, human rights activists are all among those that the Guardian is today reporting have been targeted by surveillance software made by the Israeli firm NSO and then sold to governments.”

Listeners to the afternoon edition of the BBC World Service programme ‘Newshour’ on the same day heard an item (from 30:04 here) introduced by presenter Paul Henley as follows:

Henley: “…there’s a warning that software developed by an Israeli surveillance company is being used to target the phones of human rights activists, politicians and journalists around the world.”

Tidy: “Well it’s…actually NSO – the NSO Group in Israel – they have been accused of selling to effectively the wrong people and letting their tools be misused for many years.” 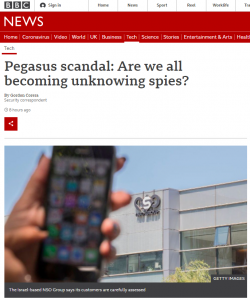 On July 21st the BBC News website published a written report by Gordon Corera titled “Pegasus scandal: Are we all becoming unknowing spies?” which once again it saw fit to tag ‘Israel’.

The caption to the main image at the top of the article reads:

“The Israel-based NSO Group says its customers are carefully assessed”

The report includes a section which reads:

“Israel has always been a first-tier cyber-power with top-end surveillance capabilities. And its companies, like NSO Group, often formed by veterans of the intelligence world, have been among those to commercialise the techniques.”

Another report that was published on the BBC News website on July 19th – “Pegasus: Who are the alleged victims of spyware targeting?” – more cautiously states that: 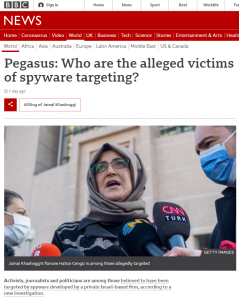 “Activists, journalists and politicians are among those believed to have been targeted by spyware developed by a private Israel-based firm, according to a new investigation.”

That report is not tagged ‘Israel’.

Like the previous ones, none of those reports informs BBC audiences that while NSO is based in Herzliya, the majority stake in the company has been owned by the London-based firm Novalpina Capital for over two years.

In other words, between July 19th and July 21st BBC audiences saw or heard at least six reports on this story promoting linkage exclusively to Israel in both wording and tags, while completely erasing the British connection to NSO Group from audience view. That is clearly not a coincidence.