Previously we looked at some of the BBC’s early coverage of the Ben & Jerry’s ice cream boycott story, noting that none of its reporting bothered to inform audiences what the Boycott, Divestment and Sanctions (BDS) campaign actually seeks to achieve.

Listeners to BBC Radio 4’s ‘Six O’Clock News’ on July 20th also heard an item on that story (from 23:59 here) in which they were given a misleading portrayal of the aims of “Palestinian activists” who support the Ben & Jerry’s decision to disallow marketing of its products in Israeli communities in Judea & Samaria and parts of Jerusalem.

Josephs: “The ice cream maker, known for its unconventionally named flavours, said it would be inconsistent with its values to continue selling its products in the West Bank and East Jerusalem. That’s been welcomed by Palestinian activists who believe boycotts are an effective way to get Israel to change policy towards the territories. But the decision has been labelled as bad business and morally wrong by Naftali Bennett who expressed his anger in a phone call to Unilever’s boss Alan Jope. Unilever has distanced itself from the decision, saying that Ben & Jerry’s maintains its independence which was set out when it was taken over more than twenty years ago. Unilever says it remains committed to Israel but without a new licence agreement, Ben & Jerry’s will only be sold there until the end of next year. It could be frozen out sooner if Israelis refuse to buy it in protest.” [emphasis added]

Those wondering to which “Palestinian activists” Josephs was referring could find a clue in a second report on the topic published on the BBC News website on the afternoon of July 20th. That report – “Israel PM warns Ben & Jerry’s owner Unilever of consequences over sales ban” – also mentions “Palestinian activists”. 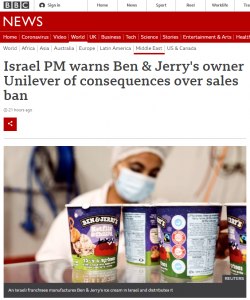 Our correspondent [Tom Bateman] says many Palestinians support such trade boycotts, but they are viewed with outrage by Israel’s government and many Israelis.”

That link leads BBC audiences to the Twitter account of “the Palestinian BDS National Committee (BNC)” which describes itself as “the Palestinian leadership of the global Boycott, Divestment & Sanctions (BDS) movement” despite having been founded two years after the BDS campaign emerged.

The BNC is headed by Omar Barghouti who has on multiple occasions made the BDS campaign’s end game perfectly clear.

In this 2019 video Barghouti states “most definitely we oppose a Jewish state in any part of Palestine”.

The claim from Jonathan Josephs that those who support boycotts do so because they believe they are “an effective way to get Israel to change policy towards the territories” clearly misleads BBC audiences with regard to the real agenda of the BDS campaign and whitewashes its antisemitic nature.

Also notable is the absence of BBC reporting on the likely effects of the decision of the ‘progressive’ American ice cream company owned by the British multinational on Palestinian and Israeli workers.

Josephs’ statement that “without a new licence agreement Ben & Jerry’s will only be sold there until the end of next year” does not clarify that Unilever has already stated that the Israeli company in Kiryat Malakhi which has held the licence to manufacture Ben & Jerry’s ice cream since 1987 will not have it renewed at the end of next year because it refused the demand to comply with the boycott.

“Ben & Jerry’s said its partnership with its Israeli franchisee would expire next year and that it would “stay in Israel through a different arrangement”. […]

The Israeli franchisee said it was unwilling to refuse to sell ice cream to Israelis in settlements and was legally prevented from doing so.”

Readers are told nothing of the potential effects on the 160 workers at that factory in a disadvantaged region of Israel. 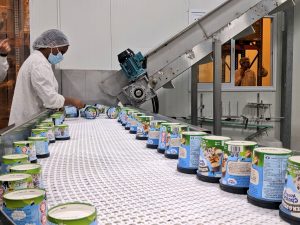 BBC audiences have also not been informed that the transport company that until now has distributed two tons of Ben & Jerry’s ice cream a week to communities in Judea & Samaria and Jerusalem now fears that the ten Palestinians from PA controlled areas that it employs will now have to be made redundant.

For years the BBC has avoided informing its audiences what the anti-Israel BDS campaign is really about. As we see, that editorial policy continues in all the corporation’s reporting on this latest story.