Readers may recall that in late June, BBC World Service radio aired a completely one-sided and context-free item about demolition orders having been issued for some illegally constructed buildings in a neighbourhood of the Silwan district of Jerusalem:

The August 10th afternoon edition of the BBC World Service radio programme ‘Newshour’ included a report (from 34:31 here) by the BBC’s Berlin correspondent Jenny Hill who is currently in Jerusalem. The same item was repeated in the programme’s evening edition (from 45:05 here) and was also aired on BBC Radio 4’s ‘The World Tonight’ (from 23:21 here). Jenny Hill’s Twitter account shows that a filmed version of the report was also made, apparently for BBC television.

The introduction to the item given by presenter Razia Iqbal (and the other two radio presenters) included an unsubstantiated claim of evictions “by this Sunday” and portrayed planning violations as something that only ‘Israel says’ is the case: [emphasis in italics in the original, emphasis in bold added]

Iqbal: “Around 200 Palestinian families have been told they must leave their homes in East Jerusalem by this Sunday. Few expect the Israeli authorities, who say the families never had permission to build in the area, to force through the eviction orders and demolish homes immediately but people living in the Silwan valley say the government is stepping up its attempts to force them out of the disputed area. Jenny Hill reports.”

Hill: “With sledgehammers and saws, the Dejani family are tearing down their own home. It’s dangerous work. A boy knocks chunks of stone from a high arch. But they told us they’ve no choice. The Israeli authorities say they built this illegally so they and their house have to go.”

Voiceover Dejani: “As you can see, as a family we’re demolishing our house with our bare hands.”

Voiceover Dejani: “It’s not easy for anyone to knock down his house with his own hands.”

The building demolished by the Dejani family is apparently located in the Khallet al Ein area of the at Tur neighbourhood of Jerusalem and the self-demolition took place in late July.  The anti-Israel political NGO PCHR reported that:

The 2 brothers said to PCHR’s fieldworker they started building a second floor of 200 square meters divided into 3 small apartments, which were finished and fully furnished 4 months ago.”

Hill then introduced another interviewee who is identified in the filmed version as Mohmad Matar.

Hill: “But scores of people living in one part of East Jerusalem fear they’ll have to do exactly that. Right outside the Old City walls: the district of Silwan. In a garden here, Mohamed and his daughters play and pick figs from the trees. It’s nine years since he built a house for his family here. But Israel says he and many of his Palestinian neighbours has no right to do so. He’s been told to leave.”

Voiceover Matar: “This is a holy blessed land. We won’t go. They’re putting pressure on us to leave Silwan. We’ll stay until our last breath. Even if they demolish the house, I’ll rent another one and I’ll stay in Silwan, in Jerusalem.”

In this video the same Mohamed Matar from the Ein al Lawza area of Silwan states “I built my house in 2010 and I was ordered to demolish it in the same year that it was built”. In other words, this interviewee featured in Hill’s written and filmed reports has defied a demolition order on a structure built without planning permission for over a decade.

Hill next brought in a representative from the Jerusalem municipality but refrained from informing audiences that in 2010 that body was criticised by Israel’s state comptroller for not dealing with illegal construction in Silwan.

Hill: “Fleur Hassan-Nahoum is the deputy mayor of Jerusalem.”

Hassan-Nahoum: “That has changed. You know Rome wasn’t built in a day. We are really narrowing the gap but it’s going to take time. At the moment there are compromises – very reasonable compromises – on the table with all these families and what we want them to do is to be able to sit down with us and negotiate something that is good for everyone.”

Hill then promoted the bizarre notion that Silwan is “sacred ground” before bringing in an interviewee who is not connected to the issue of the illegal construction that is supposedly the topic of her report.

Hill: “This is a battle for sacred ground. A few Jewish families live among the Palestinians here with security provided by the State of Israel.”

Lurie: “The heart and soul of the Jewish people is here in Jerusalem.”

“Recently” is in fact six years ago when Ateret Cohanim won a court case concerning that synagogue. Hill made no effort to inform her audiences that the reason there is an “old synagogue” in Silwan is because part of it – Kfar HaShiloach – was a Jewish village, built in the early 1880s, until its Jewish Yemenite residents were ordered by British mandate forces to leave in 1938 due to Arab rioting.

Lurie: “The prophet spoke two thousand years ago that we were going to come back here. Anyone who wants to live in the Jewish state with Jewish people: a hundred percent. I’ve said it before and I’ll say it again; I’ll put the blue and white carpet; I’ll roll it out in front of them with pleasure. But the second he wants to kill me, that type of Arab is not welcome in this Jewish homeland.”

Hill then closed her uninformative report:

Hill: “The dispute over this valley has been going on for decades and in truth there’s little hope of resolution. All the new Israeli government can do is try to stop it escalating into serious violence. The Dejani family worked through the night to destroy their house, in a city divided over how to build its future.”

Clearly BBC audiences learned nothing new about the problem of illegal building in some Jerusalem neighbourhoods or the Jewish history in some of the areas the corporation insists on portraying as “East Jerusalem”. Hill’s reports are just one more chapter in the BBC’s long-standing amplification of a narrative concerning Jerusalem long promoted by political NGOs that has been adopted by many a BBC correspondent based in that city in the past – and present. 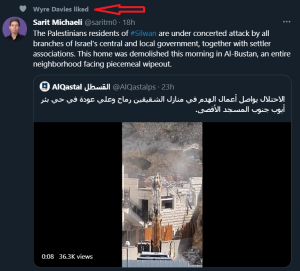 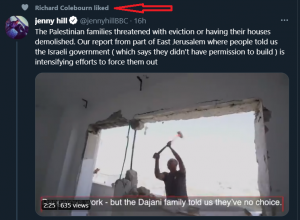