Earlier this month we discussed multi-platform audio and written reports on the subject of crime in the Israeli Arab sector produced by the BBC Jerusalem bureau’s Yolande Knell.

Despite one of those reports having been aired on BBC Radio 4, the August 28th edition of that station’s ‘From Our Own Correspondent’ included another item on the same topic, which included some noteworthy framing. 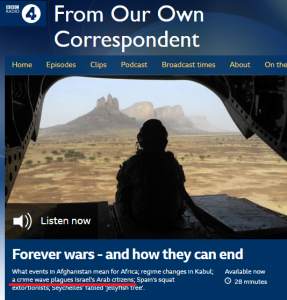 In her opening remarks at the start of the programme, presenter Kate Adie told listeners that: [emphasis in italics in the original, emphasis in bold added]

Adie: “Among Israel’s Palestinian communities there’s a climate of fear as organised crime runs rampant and the murder rate spikes.”

Adie’s introduction to the item itself (from 11:43 here) was very similar to the synopsis appearing on the programme’s webpage. Both began with the debatable claim that “the politics of the Israeli-Palestinian conflict” are “inevitably” central to reporting from Israel even though that is obviously the choice of the individual journalist and there are plenty of stories – including this one – that have nothing to do with that conflict.

Adie: “Reporting from Israel often inevitably revolves around the politics of the Israeli-Palestinian conflict. Even the basic day-to-day issues – town planning, health care, education – are complicated by this central problem.”

Adie refrained from providing any evidence to support that specious claim and so listeners were left with the inaccurate impression that Israeli health care, for example, is “complicated” by “the conflict”.  She next shoehorned in additional framing unrelated to the item’s subject matter: the violence and rioting seen in some Israeli towns in May, during a military conflict that – according to Adie – took place only “in Gaza”, despite Israeli civilian communities having been attacked with over four thousand missiles.

Adie: “So imagine the challenge of policing in such a divided setting. During the conflict in Gaza this spring, there was also mass communal violence in Israel itself with arson, assaults and riots in both Jewish and Arab neighbourhoods.”

Adie went on to show just how opportunistic and gratuitous her framing had been up to that point.

Adie: “But even before then, Palestinian citizens of Israel had been complaining for some time of a wave of violence within their communities – not politically motivated but driven by organised crime groups. The mobsters trade in drugs and weapons and their vendettas have blighted many areas. Yolande Knell has been speaking to several families trying to cope with the aftermath.”

Knell began with an account of her visit to a bereaved mother – Siham Ades – who also appeared in her earlier written report. She went on to reinforce the framing already promoted by Adie.

Knell: “It was another shocking example of the wave of violent crime that’s threatening Israel’s Arabs – the Palestinian citizens of Israel, as many prefer to be known.”

As we noted here recently, the BBC’s relatively recent practice of framing all Israeli Arabs as Palestinians despite the fact that the majority do not identify as such has already led to confusion at the BBC itself, let alone among audiences. Knell went on:

Knell: “While they make up just a fifth of the population, they’re the victims of the vast majority of murders in the country. Illegal guns have proliferated within Israel, with Arab gangs now dominating the criminal underworld. They profit from racketeering, extorsion and illegal loans. Weapons are also used in family feuds and domestic violence.”

Knell failed to adequately clarify that most of those “illegal guns” are found in the Arab sector.

“Weapons-related arrests by Israel Police increased by about 22% in 2020 compared to 2019, with 90% of the arrested suspects coming from the Arab-Israeli sector…”

She made no attempt to inform her audience how prevalent the illegal weapons “used in family feuds and domestic violence” actually are within that sector – not only in criminal gangs.

“…according to data released by the Public Security Ministry, 93% of shooting offenses in 2018 were perpetrated by Arab citizens.

“We’re talking about a situation in which one in five Arab homes is armed,” said Ola Najmi-Yousef, who directs the Safe Communities initiative for the Abraham Initiatives nonprofit.”

She continued with a claim promoted in all her previous reports:

Knell: “Many Israeli Arabs argue that while the police have cracked down on crime among Israeli Jews, there’s not been enough effort made to tackle it in their communities.”

Knell: “She links the crime to what she sees as systemic discrimination against Palestinian citizens in housing, employment and education. ‘You feel the authorities don’t care about what’s happening because for them, we’re second-class citizens’ Diana says.”

Knell did not bother to inform listeners that:

“Around NIS 10 billion ($2.96 billion) was allocated to local Arab governments in the past five years in every field imaginable: to train teachers, build water and sewage pipes, renovate public buildings, subsidize employment, and much more.”

Knell then referred to remarks made last month by Israel’s prime minister and the government’s previously announced programme to tackle the issue of violence in the Arab sector before going on to cite the police officer interviewed in her earlier written report, while again risking confusing audiences with her politically motivated use of the term Palestinian.

Knell: “He tells me that a lot of reforms have already been made, with more police stations being opened and more police officers being assigned to Arab areas in recent years, including ones newly recruited from Palestinian families. An economic unit now investigates illegal loans. ‘All the slogans – the police don’t care, the police don’t act – are wrong’ he says forcefully. ‘We understand we need to invest in Arab communities because the toughest crime is there’. His plea is for more cooperation and more trust from ordinary citizens who often fear censure or retribution if they come forward to give evidence. ‘We can’t be on our own to confront crime’ Commander Ezra tells me. ‘We need more imams with us, the heads of councils, civil society’.”

Returning to the story of the youth murdered in Jaljulia, Knell noted that “the commander hints that police should have been made aware of a local dispute that was escalating just before his death” but listeners were told nothing more.

Although this report is considerably shorter than her previous ones on the same topic, it is worth remembering that even when Knell did have more time in which to report in depth on relevant issues such as the lack of cooperation with the police, the failures of the sector’s leadership, corruption in local government and specific social constructs, she refrained from doing so.

And so once again, BBC audiences heard a narrative of ‘discrimination’ along with framing of Arab Israelis as Palestinians and redundant linkage of this serious domestic issue to the regional conflict.

A slightly different version of the same report was also aired (from 11:18 here) on BBC World Service radio’s version of ‘From Our Own Correspondent’ on the same day.