Earlier this month the BBC News website published a report about a “Cyprus alleged hitman plot” which was discussed here. 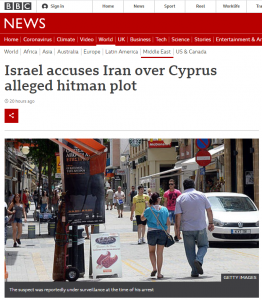 No follow-up reporting on that story has appeared on either the site’s ‘Middle East’ page or its ‘Cyprus’ page. BBC audiences are therefore unaware that an additional suspect was arrested last week.

“A second suspect has reportedly been arrested in Cyprus in connection with an alleged plot to assassinate one or more Israeli businesspeople in Cyprus last month.

According to a local Cypriot website, a 27-year-old food delivery worker originally from Pakistan was arrested on Tuesday evening after a police raid on his home. Authorities reportedly seized a number of items from his residence.

Cypriot authorities were previously said to be probing an Azeri national on terror suspicions as part of the alleged plot. That suspect was ordered held in custody another six days during a hearing last week, according to Cypriot reports.”

Neither has the BBC informed its audiences that local media outlets have reported that “Cypriot authorities now believe terrorism is the most likely motive in last month’s alleged plot to assassinate one or more Israeli businesspeople in Cyprus”.

In other words, all BBC audiences know about this developing story is the vague and unhelpful ‘he said-she said’ account published nearly two weeks ago.

WHY DOES THE BBC PROMOTE DENIALS THAT HAVE BEEN DISPROVED IN COURT?

Like Loading...
Tags from the story
BBC, BBC News, BBC Online, Cyprus, Israel, Terrorism
Written By
Hadar Sela
More from Hadar Sela
It is an all too rare pleasure to be able to note...
Read More