As blogger Elder of Ziyon first revealed, a Guardian article on the impact of Texas anti-BDS legislation on a Palestinian-American egregiously misrepresented the law.  The piece (‘I thought I was a free man’: the engineer fighting Texas’s ban on boycotting Israel, Dec. 7), written by the outlet’s digital producer and reporter Erum Salam, included the claim, in the strap line and text, that the bill bans individuals from boycotting Israel. 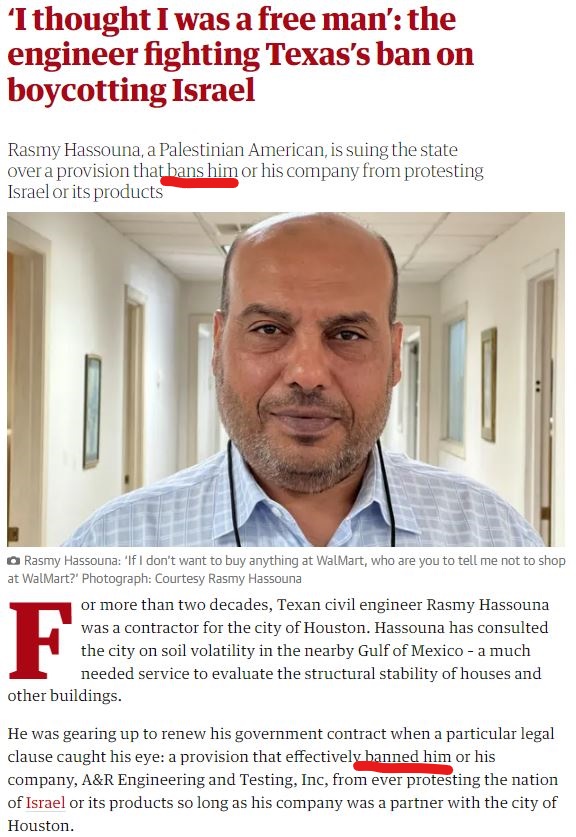 It also includes a misleading caption, under the photo of the ‘victim’ of Texas’s BDS law, reinforcing the broader suggestion that the law prevents individuals from making consumer decisions based on their personal politics.

Rasmy Hassouna: ‘If I don’t want to buy anything at WalMart, who are you to tell me not to shop at WalMart?’

However, as the text of the bill makes clear, the bill only bars companies that wish to do business with the state from participating in the boycott of Israel.

Further, it only impacts companies with more than 10 employees, and contracts worth more than $100,000. Individuals, who enjoy constitutionally guaranteed free speech protections, are not impacted by the bill.

We contacted Guardian editors about the error, and they upheld our complaint – revising the relevant sentences and adding the following addendum: