An article in the Observer – sister site of the Guardian – on Dec. 19th (‘We are family’: the Israelis sharing life and hope with Palestinians), by their new Jerusalem correspondent Bethan Mckernan, is notable for two reasons.  First, buried within the 1500 plus word (deceivingly titled) piece about settler violence is the Guardian’s sole ‘coverage’ of the Palestinian terror attack last week north of Shavei Shomron that killed 25 year old Yehudah Dimentman and injured two others.

When we say the news was buried, we mean that it was 13 paragraphs down, framed thusly:

The Palestinians can also turn to violence. Earlier this week, gunmen ambushed a car with Israeli license plates as it left Homesh in the northern West Bank, killing a 25-year-old and wounding two others.

“The Palestinians can also turn to violence” is one of those characteristically Guardian sentences, falsely suggesting, without saying so explicitly, that Palestinian terror is rare – a bug, rather than a feature.  Yet, here’s a graph showing the number of terror incidents in 2021 though November – compiled by CAMERA UK based on data from Israel’s Security Agency: 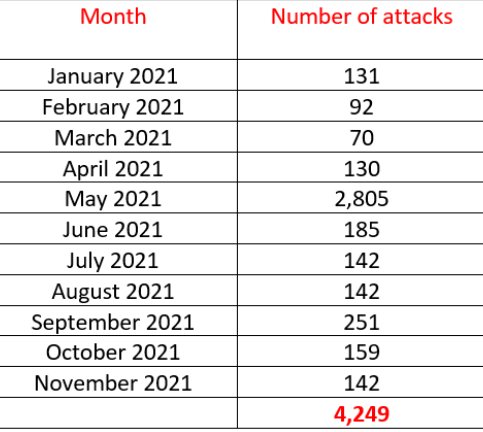 As you can see, even excluding the 2,805 attacks during the May war with Hamas, there are, on average, well over one-hundred Palestinian terror attacks each month.

The other element of the piece that stood out was McKernan’s claim that Israeli settlers murdered four Palestinian civilians in the first 10 months of 2021, citing UN data.

However, as our colleague Tamar Sternthal demonsrated in a recent article, the claim that four Palestinians have been “murdered” by settlers, putatively based on a report by United Nations Office for the Coordination of Humanitarian Affairs (OHCA), is not accurate.  OCHA included the following critical information concerning its data on Palestinians killed by settlers:

OCHA doesn’t make its data publicly available, and therefore their claim about the four Palestinians allegedly killed in settler violence cannot be verified. Nevertheless, the article’s failure to note that the reported figure, by OCHA’s own telling, includes Palestinian assailants falsely casts attackers as victims by claiming all four Palestinians were “murdered” by Israeli settlers.

We complained to Guardian editors, asking that they either substantiate the claim – with details about the incidents – that four Palestinians were “murdered” by settlers, or retract the claim.  Though they agreed to replace the word “murdered” with “killed”, and added an editor’s note at the bottom noting the revision, it still grossly misleads by suggesting that the Palestinians assailants in question were victims of Israeli settler attacks.

Setting the record straight on British Jews’ support for Israel