Last year the BBC produced multiple reports on the topic of crime within the Arab-Israeli sector, with audiences told that: 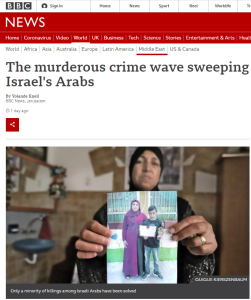 “Bereaved families and Arab officials claim that police inaction is one of the main reasons for the endemic violence plaguing their neighbourhoods.”

In November a similar claim of “police inaction” appeared in a report about the arrests of sixty-five illegal arms dealers:

THREE MONTHS OF BBC COPY-PASTING OF A REDUNDANT CLAIM

As noted at the time, the BBC’s report did not make any mention of the sources of the weapons seized.

“Investigators believe most of the weapons came from the West Bank and were smuggled into the country from Lebanon and Jordan. The rest were stolen from Israeli army bases.”

On January 25th the IDF and the Israeli police thwarted a smuggling attempt from Jordan. 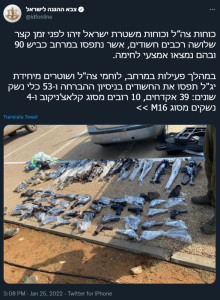 According to the IDF, 39 handguns, 10 Kalashnikov rifles and four M-16 rifles were found inside vehicles stopped along the main highway running along Israel’s long border with Jordan. […]

The police said four people who were in the cars were arrested and the three vehicles were seized.

The police indicated that the guns were likely to have been sold to Arab Israelis, and estimated the value of the 53 guns at some NIS 3 million ($940,000). […]

The four suspects — three men and a woman — were identified by police as residents of East Jerusalem.”

BBC audiences have to date seen no reporting on that story or similar previous ones concerning weapons smuggling from Jordan or Lebanon.