As we’ve continually documented, the Guardian’s Chris McGreal (their former Jerusalem correspondent) seems to possess a visceral contempt for Israel, a hostility that, unlike other reporters who share his ideology, he doesn’t try very hard to hide.  He’s also long promoted the ‘apartheid’ smear against Israel, and used language evoking antisemitic tropes.

In his latest article (“‘Apartheid state’: Israel’s fears over image in US are coming to pass”, Feb 3), McGreal is true to form.  Reflecting upon Amnesty International’s report (falsely) accusing Israel of apartheid, McGreal writes:

Israel is…concerned that the breaking of the longstanding taboo in the US on comparing its rule over the Palestinians to white South Africa’s racist repression of its black population is evidence of a slower-moving – but potentially more dangerous –threat: the fracturing of once rock-solid backing for Israel within its most important ally.

For years, polls showed that Democrats sympathised with the Israelis at twice the rate of support for the Palestinians. But since the Israeli assault on Gaza in 2014, backing for the Jewish state has fallen and support is now about evenly divided.

Whilst what he writes about Democrats is narrowly true, McGreal obfuscates a fact that complicates his narrative of ‘eroding US support for Israel’ – namely, the that the very poll he cites shows that support for Israel amongst all Americans is at a 20 year high: 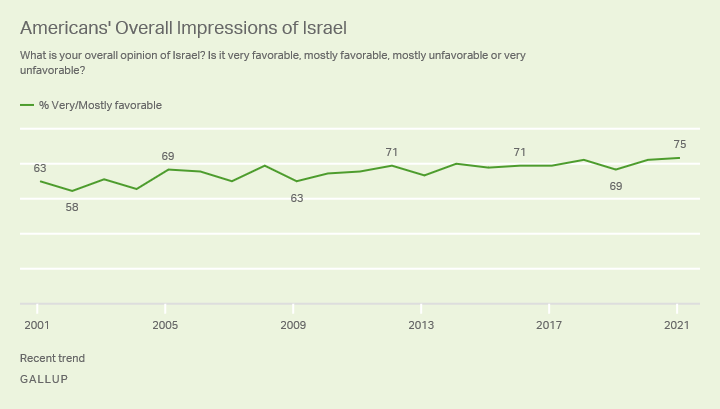 In fact, even within the Democratic Party, the picture is more complicated than McGreal makes it out to be.  Let’s recall that the more anti-Israel candidate in the 2020 Democratic Primary, Bernie Sanders, was handily defeated by Joe Biden, who was regarded by many as a strong supporter of Israel during his 36 years in the Senate.

pro-Israel groups are increasingly concerned at the diminishing effectiveness of their attempts to portray the Jewish state as yearning for peace but confronted by Palestinian terrorism.

That claim has increasingly been challenged by what Americans can now see on social media, particularly video of Israeli attacks and maltreatment of Palestinians. Israel’s 2014 assault on Gaza – when it killed more than 2,000 Palestinians and destroyed schools and homes in response to Hamas rocket attacks that killed three Israeli teenagers – helped solidify the view of an all-powerful state unleashing destruction against a largely defenceless population.

The bias here is egregious, and has more to say about the anti-Israel circles McGreal travels in, who view “an all-powerful state unleashing destruction against a largely defenceless population”, than about American opinion – which, as the poll above shows, did NOT in fact trend towards the Palestinians after the 2014 war.

Additionally, he gets key details of the war wrong, and omits others.

First, roughly half of those killed in Gaza were believed to be combatants.  Also, the three Jewish teenagers were not killed by “Hamas rocket attacks”.  The children were kidnapped and murdered in the West Bank by a group affiliated with Hamas, which was followed by Israeli arrests of Hamas operatives in the territory. Hamas rocket attacks followed, which ultimately ignited the war.  Moreover, the “defenceless” antisemitic extremists in Gaza managed to fire thousands of rockets and mortars at Israel’s civilian population during the conflict.

The rise of Black Lives Matter has fuelled the drive to frame the Palestinian cause as a civil rights issue of resistance to Israeli domination.

Of course, this narrative has been “fuelled” by those cynically attempting to frame the Israeli-Palestinian conflict as one between powerful Israeli ‘whites’ and marginalized Palestinians ‘people of colour’ – a counter-factual claim about the racial make-up of Israeli and Palestinian society that we’ve previously posted about.  This false binary denies Palestinians agency and erases the annihilationist antisemitism of well-armed groups like Hamas, for whom the conflict will only end when the Jewish state ceases to exist.

Israel’s attempts to push back against the shifting narrative have been undermined by its own actions, including the passing of the “nation state” law in 2018 which enshrined Jewish supremacy over the country’s Arab citizens. Israel’s prime minister, Naftali Bennett, and members of his cabinet have a long history of opposition to a Palestinian state.

In addition to his mischaracterisation of the “nation state law”, which even the left-wing Israeli Democracy Institute acknowledged was largely “symbolic”, note that McGreal uses the antisemitic term “Jewish supremacy” in his own voice.  The term “Jewish supremacy”, recently refashioned into a rhetorical tool to bludgeon the Jewish state, is rooted in “obsessive, distorting hatred of the Jewish people”, was used by Nazi propagandists and, more recently, by notorious anti-Semites like David Duke and Gilad Atzmon.

We reached out to the CST about McGreal’s use of the term, and they sent us the following comment:

“The phrase ‘Jewish supremacy’ was, for decades, the preserve of neo-Nazis and other antisemites. It has now become common currency in parts of the left, presumably in an attempt to mimic north American discourses about white supremacy in the United States. This is remarkably naïve and irresponsible, because all it has achieved is to infiltrate a phrase with a wholly antisemitic provenance into the language of anti-racism. The Guardian should be more careful with how it reflects this usage”.

We complained to the Guardian’s Readers’ Editor asking that they remove the hateful term from McGreal’s article.