During Israel’s previous election in March 2020 we noted the BBC’s reluctance to inform its audiences of the ideologies of four Arab parties running on a joint list.

“Evidently as far as the BBC is concerned, all its audiences need to know about the ideologies of parties included on Joint Arab List such the communist Arab-Jewish party Hadash, the Muslim religious party Ra’am and the anti-Zionist Balad is that they ‘represent’ the 16% of the Israeli electorate that the BBC inevitably chooses to portray as one monochrome group.”

The BBC did not report the split of the Ra’am party from the Joint List in February of this year due to differences of opinion which began last summer over LGBTQ issues.

“A Joint List lawmaker warns the future of the Arab political alliance could be in doubt after its leader Ayman Odeh voted in support of a bill barring psychotherapists from performing gay conversion therapy, the Kan public broadcaster reports.

According to Kan, MK Mansour Abbas says the continued existence of the Joint List depends on the behavior of its lawmakers in the near future. He adds that many of the party’s supporters are angry over Odeh and others’ backing of the bill and are demanding the breakup of the Joint List.

Abbas heads the Ra’am faction, which is affiliated with the southern branch of the Islamic Movement in Israel.” 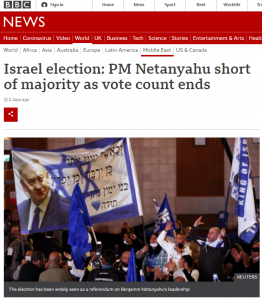 The report informs BBC audiences that:

“In a surprise development, an Arab party which is projected to get four seats could hold the balance of power. […]

The Arab party, Raam, has not declared whether it will support the efforts of Mr Netanyahu – not a natural ally – to form a governing coalition or those of the bloc of parties opposed to him remaining in office.”

The BBC’s belated portrayal of Ra’am’s February split from the Joint List airbrushes the conflict over LGBTQ issues from the picture:

“Raam split from the Joint List earlier this year in part because Raam’s leader Mansour Abbas said he was open to working with Mr Netanyahu to address the needs of Israel’s Arab citizens, who make up about 20% of the population.”

“An Arab party has never sat in government in Israel, and such parties do not share Mr Netanyahu’s right-wing ideology.” [emphasis added]

While the religious Ra’am party may indeed have little in common with the secular Likud party, it is clearly disingenuous of the BBC to fail to inform audiences of the former’s Islamic Movement roots and Muslim Brotherhood links which are a clear indication of “right-wing ideology”. Apparently even that conservative party’s anti-gay rights stance, its vote against the peace agreement with the UAE and its history of sympathy for convicted terrorists likewise do not convince the BBC that it is located on the “right-wing” of the political map.

Once again we see that the BBC avoids the opportunity to provide its audiences with a clear picture of the origins, ideology and agenda of Arab political parties, even when one of them appears to be conducting negotiations with other parties attempting to put together a coalition government.