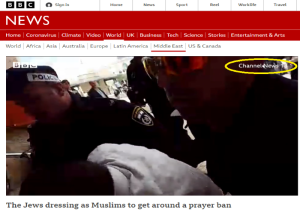 CAMERA UK submitted a complaint to the BBC on two points: the fact that both items failed to comply with the BBC News style guide on the presentation of Temple Mount and instead used the partial and politically motivated terms “al-Aqsa Mosque compound”, “al Aqsa compound” and “al Aqsa mosque” and the fact that both items failed to name the “Islamist group” with which interviewee Hanady Halawani is associated.

The first part of the BBC News website’s response to that complaint provides an interesting view of the corporation’s approach to the entry concerning Temple Mount in its own style guide. [emphasis in bold added]

“Thank you for getting in touch about our video article The Jews dressing as Muslims to get around a prayer ban.

The team advise that the reason they stuck to “al-Aqsa Mosque Compound” as the name given to the site by Muslims is simply because the main Palestinian character – like most Palestinians – repeatedly refers to the entire site as al-Aqsa Mosque and never once uses the term Haram al-Sharif, the Noble Sanctuary. They had to explain her reference.

This also reflects the fact we have only limited space for an introduction and on-screen and do not want to overload our story with multiple terms or too much text.

The radio version of the report also noted that the Dome of the Rock was part of the same site and in all versions of the report, the contested site is described as the holiest place for Jews and the third holiest for Muslims, so it should be clear what we’re referring to.

As, unfortunately, events at “al-Aqsa mosque” are a common feature of the Israel-Palestinian conflict, the team believe the average audience member is able to make immediate sense of the reference to the mosque better than “Haram al-Sharif” when only one term can be given.

The Editorial Guidelines cited in your complaint are intended to ensure that we always make clear that different terms are used to describe this holy site by different religious groups, to show our understanding of how it is contested.  The team consistently did this in all scripts.”

That response obviously does not address the issue of the political motivations that lie behind the use of the term “al Aqsa Mosque” to describe the entire Temple Mount compound.

As noted here previously, BBC journalists generally adhered to the BBC News style guide until late 2014, when audiences began to see a change in the terminology used. Coincidentally or not, that change emerged after the PLO put out a “media advisory” document (since removed from its website) informing foreign journalists of its “[c]oncern over the use of the inaccurate term “Temple Mount” to refer to Al-Aqsa Mosque Compound in Jerusalem”. That directive is of course part and parcel of the PLO’s tactic of negation of Jewish history in Jerusalem.

“Al-Aqsa Mosque Compound, sometimes referred to as the Noble Sanctuary (“Haram al-Sharif” in Arabic), is the compound that contains Al Aqsa building itself, ablution fountains, open spaces for prayer, monuments and the Dome of the Rock building. This entire area enclosed by the walls which spans 144 dunums (almost 36 acres), forms the Mosque.” [emphasis added]

Apparently, the BBC apparently sees no impartiality issues with promotion of that PLO narrative and terminology it claims is used by “most Palestinians”.

The second section of the BBC’s response relates to the part of our complaint concerning the failure to clarify that interviewee Hanady Halawani is associated with the Northern Islamic Movement – an organisation which is banned in Israel. The BBC News website replied:

“The choice of Palestinian voice in the story was with the intention to choose someone whose commitment to worshipping at the same holy site was also quite extreme.

Hanady spends most days at al-Aqsa.

For radio, with a little more space:

Most days, Hanady Halawani, can be found at the mosque, although the Israeli authorities have previously barred her from the site.  She’s seen as part of an illegal Islamist group but denies doing anything wrong.

Ms Halawani rejects the label of “Murabitat” saying it is an Israeli-invented term. The team point out that is [sic] no such formal, self-declared organisation and she considers herself to be simply a Quran teacher and regular worshipper at the mosque.

They also understand that no countries other than Israel have designated the Murabitat and Murabitin (in this incarnation) as illegal groups and so considered our explanation to be clear and accurate. […]

With all these facts in mind, we consider that we described Ms Halawani satisfactorily.

It should also be pointed out that while she may well have extreme views on other religious matters, her reaction to the idea of Jews disguising themselves to pray at Temple Mount or the al -Aqsa Mosque compound/ Haram al-Sharif, was fairly typical of Palestinian Muslims, as was her idea that Muslims will protect the site from any takeover.

For those reasons the team do not agree that it is “crucial to audience understanding” of the opinions expressed by Ms Halawani to understand the nuances of Israel’s stance on the Murabitat.

The team frequently do interview members of internationally designated terrorist groups such as Hamas, Palestinian Islamic Jihad in the course of their work. The purpose is never to amplify Islamist narratives but to explain a complex conflict to an international audience.”

One could of course take the view that the BBC’s international audience is more likely understand that “complex conflict” if the interviewee’s associations and background are fully clarified. One of the links provided to the BBC by CAMERA UK in our complaint notes that: [emphasis added]

“Salah’s [Raed Salah – leader of the Northern Islamic Movement] speeches are laced with antisemitism, and for that reason he was barred from entering Britain in 2012 (though he was granted entry after an appeal). His message contains several consistent themes: the Jews aim to destroy the al-Aqsa Mosque, and Muslims are duty-bound to defend it by any means necessary; the struggle between Jews and Muslims is an eternal one that appears in the Qur’an. […] In the sheikh’s view, the entire expanse of the Temple Mount, which comprises 36 acres, is sacred and belongs solely to Muslims—not only the al-Aqsa Mosque area. The Jewish enemy, Salah claims, is deliberately planning a gradual takeover of the site, first by taking control of the gates to the mosque and then by building a Jewish temple in place of the “radiant Dome of the Rock.” He asserted as much during a conference he held for members of the Masatab al-Ilm (“Benches of Learning”) organization on November 27, 2013. Masatab al-Ilm eventually spawned the Murabitun and the Murabitat (the “Steadfast Ones,” in their male and female forms), groups that were themselves declared illegal in September 2015.

The founding of the Murabitun in 2010 marked a further step toward realizing Salah’s vision. Groups of women and men, mostly from East Jerusalem, began to operate ostensibly as “study groups” but with the real intention of disrupting visits by Jews to the Temple Mount and provoking disturbances in the compound. Groups of women led by Hanadi Halawani, Khadija Hawis, Sahar Natsheh, and others frequently attacked police officers and worshippers on the Mount. These groups gained wide support among Muslim Brotherhood factions in the Arab world and especially among Hamas backers. Donations from Muslim Brotherhood NGOs arrived via Turkey, Qatar, and Lebanon. Halawani and Hawis were repeatedly invited to conferences of al-Kutla al-Islamiya (the Islamic Bloc) at West Bank universities, particularly Bir Zeit near Ramallah and an-Najah in Nablus.”

While the BBC News website may indeed be of the opinion that it “described Ms Halawani satisfactorily”, it is clear that its portrayal of her as a self-described “Quran teacher and regular worshipper” by no means tells the whole story and does not assist audience understanding of a “complex conflict” and the tensions surrounding Temple Mount which the group with which she is associated has helped provoke.

ANOTHER STEALTH ‘CLEAN-UP’ BY BBC ARABIC AFTER CAMERA COMPLAINT