Over the Pessah holiday, terrorists in the Gaza Strip launched several rocket attacks into Israeli territory for the first time since the beginning of January.

On April 18th a rocket was launched towards the Eshkol district.

“A rocket fired from the Gaza Strip on Monday evening was intercepted by the Iron Dome air defense system, the military said.

Incoming rocket sirens sounded in the towns of Kissufim and Ein HaShlosha, near the border with the Strip.

The Eshkol regional council and the Magen David Adom ambulance service said there were no reports of injuries following the rocket attack. Local residents were told to stay in sealed rooms amid concerns over more potential attacks.”

The IDF subsequently responded to that attack.

“A rocket fired from the Gaza Strip on Wednesday evening landed in the southern city of Sderot, causing slight damage, officials said. […]

Footage from the scene showed damage to a car and a wall, as well as what appeared to be part of the rocket. “Police sappers are handling the item in order to safely remove it from the scene,” the Israel Police said in a brief statement. […]

Four people were being treated for anxiety, including a 70-year-old man who was taken to a hospital, but there were no physical injuries, according to the Magen David Adom ambulance service.”

The IDF later responded to that attack as well.

“During the airstrikes, terrorists in the Strip fired anti-aircraft missiles, the second time in a row that such a system was used. On Tuesday, during retaliatory Israeli strikes on the coastal enclave, Hamas fired a Russian-made Strela (SA-7) shoulder-to-air missile.

The IDF said that the attempts to hit any aircraft, both on Tuesday and Thursday, had failed and no damage was caused.”

On April 22nd two rockets – one of which fell short, injuring several people in Beit Hanoun – were fired at the Sha’ar HaNegev district.

“According to the military, from the first salvo, one rocket landed in an open field in the Sha’ar Hanegev regional council, while the second fell short in the Hamas-run coastal enclave.

Some Palestinian media reports said the failed launch landed near a residential area of Beit Hanoun in the northern part of the Strip, injuring one person. There was no immediate statement from Gaza medical authorities on the matter.”

On April 23rd one rocket was launched from the Gaza Strip.

“Early Saturday, a third rocket was fired from the southern Gaza Strip, landing in an open area near a town close to the border, the IDF said.”

BBC coverage of those four separate incidents of rocket attacks against Israeli civilians was minimal.

Listeners to a news bulletin in BBC Radio 4’s ‘Today’ programme on the morning of April 19th heard a short item (from 2:07:43 here) concerning the previous night’s attack which opened using the BBC’s well-worn ‘last-first’ formula and the term ‘militants’ instead of terrorists. The report also used the politically partial term ‘al Aqsa Mosque compound’ rather than terminology instructed by the BBC News style guide. [emphasis in bold added]

Newsreader: “Israel has carried out its first airstrikes on the Gaza Strip in months in response to a rocket being fired by militants. Tensions are high after a weekend of violence around the al Aqsa Mosque compound in occupied East Jerusalem – a contested holy site known to Jews as Temple Mount. Our Middle East correspondent Yolande Knell reports.”

Knell: “Sirens sounded in southern Israel overnight before an explosion was heard. The Israeli military said a rocket was intercepted using the Iron Dome missile defence system. Hours later it said it had hit a weapons manufacturing site belonging to the militant group Hamas in retaliation. Flames and smoke could be seen in Gaza but there were no reports of injuries on either side. No Palestinian militant group has said that it fired the rocket but Israel holds Hamas, which governs Gaza, ultimately responsible for all such attacks. It had made threats against Israel following an incursion by Israeli police into al Aqsa Mosque early on Friday. The police said they acted to stop rioting by Palestinians.”

An item aired on the BBC World Service radio programme ‘Newsday’ on April 21st (from 14:42 here) opened with what is apparently a reference to the previous night’s rocket attack but with no mention of the fact that a home in Sderot was damaged and once again using the ‘last-first’ formula.

Rana Rahimpour: “The Israeli air force says it has struck military targets in Gaza, including a suspected training site for the militant group Hamas, in response to a rocket fired from Gaza into Israel.”

Local media reported the targets of the IDF’s attacks differently:

“…the IDF said it responded with airstrikes in central Gaza targeting a military post as well as a tunnel complex “containing raw chemicals used for the manufacturing of rocket engines.” The IDF claimed its strike marked a significant blow to the rocket production process in Gaza.”

On April 22nd the BBC News website published an article by Yolande Knell titled “Jerusalem holy site clashes fuel fears of return to war” on its ‘Middle East’ page in which readers find vague references to two attacks – presumably those of April 18th and April 20th. 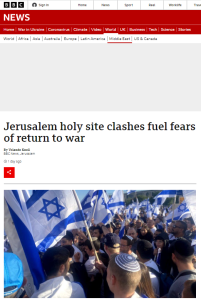 “This week raised fears of renewed violence, as for the first time in months militants in Gaza launched two rockets into southern Israel and then used anti-aircraft fire against Israeli war planes as they struck Hamas targets in response.

Although no serious injuries were reported on either side, the sleepless nights brought back painful memories of previous conflicts and fears of a slide into a new conflict.”

The caption to one of the photographs illustrating the article reads: “A Palestinian rocket launched from Gaza caused minor damage to a house in Israel early on Thursday” while the caption to another reads: “The Israeli military said it struck militant sites in Gaza in response to this week’s rocket fire”.

As we see the BBC News website did not produce stand-alone coverage of any of the four separate incidents of rocket attacks against Israelis over a period of five days during the Pessah holiday. While the photo caption in Yolande Knell’s article indicates that the BBC is aware of the fact that a home in Sderot sustained damage from one of the attacks, the BBC obviously did not consider that story particularly newsworthy. Two of the attacks have to date not been reported at all on any platform and as usual the BBC has ignored the topic of shortfall rockets and the resulting injuries to Gaza Strip residents.