BBC Radio 4’s initial reporting on the death of Shireen Abu Akleh on May 11th in the ‘Today’ programme was previously discussed here:

As the day progressed, that story was reported in several additional BBC Radio 4 programmes and recurring points and issues became increasingly apparent.

One of those issues is the BBC’s unquestioning amplification of the narrative pushed by Al Jazeera, Qatar and the Palestinian Authority according to which – without any proof presented – Israel is responsible for Shireen Abu Akleh’s death. Notably, rather than clearly clarifying to audiences that the circumstances and facts behind the incident are unknown, the BBC chose to promote the theme of their being ‘disputed’.

Another issue is the alacrity with which the BBC gave unqualified amplification to the equally unproven claim from the same sources that she had been deliberately killed – in some versions by a “sniper” – rather than accidentally hit by an errant bullet from one side or the other.

The fact that Abu Akleh was wearing a bullet proof vest marked ‘press’ and a helmet at the time of her death was emphasised repeatedly by BBC journalists as though that attire would have prevented her being caught in crossfire.

In two programmes listeners heard that Abu Akleh was in Jenin with the Israeli forces. CAMERA UK has found no confirmation of that claim, including from official sources.

BBC reporting consistently skirted around the relevant context of Jenin as a stronghold of various terrorist groups and the fact that several perpetrators of recent terror attacks against Israeli civilians came from that area.

Also notable in some reports is the amplification of claims that there was no shooting by Palestinian gunmen at the time of the incident, despite the existence of videos showing otherwise.

Content aired on the evening of May 11th failed to mention the fact that Palestinian coroners had by then stated that, after an initial autopsy, they could not determine the party responsible for Abu Akleh’s shooting.

The next BBC Radio 4 programme to report on the incident after ‘Today’ was ‘World at One’. 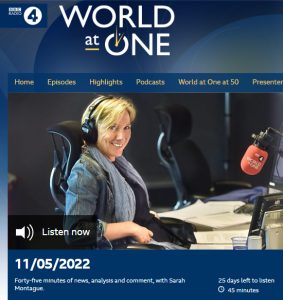 Newsreader: “A veteran Palestinian American journalist from the broadcaster Al Jazeera has been shot dead while covering an Israeli army raid in the occupied West Bank. Al Jazeera and the Palestinians say an Israeli sniper shot Shireen Abu Akleh in the head. Israel says it was likely that she was killed by Palestinian gunfire. Our correspondent Tim Franks reports from Jerusalem.”

Franks: “Shireen Abu Akleh was widely known and widely admired by viewers and colleagues alike. She’d gone to report on an early morning Israeli military raid in Jenin in the West Bank. Video of the shooting [sic – there is no video of the actual shooting, only of the scene after the incident] shows that she was wearing a bullet proof vest clearly marked with the word ‘press’. The Palestinian president described her death as an execution. Qatar, which owns the Al Jazeera network, called it an act of state sponsored terrorism. An Israeli military spokesman said that at the time Shireen Abu Akleh died, dozens of Palestinian militants were firing indiscriminately towards Israeli soldiers. That is disputed by eyewitnesses.”

Stourton: “The veteran Al Jazeera correspondent Shireen Abu Akleh was shot dead this morning on the West Bank while covering an Israeli army raid. Her employers called it a blatant murder and accused Israel of assassinating her in cold blood. Israel’s prime minister said armed Palestinians were probably responsible. Tim Franks is our correspondent in Jerusalem. Tim, what do we know for sure?”

Franks: “What we know for sure is that she went early this morning, Shireen Abu Akleh this veteran Palestinian journalist, to Jenin in the north of the West Bank. Now Jenin is where the Israeli army have launched a series of raids in recent weeks…ehm…after a spate of attacks inside Israel. Over the last several weeks about 26 Palestinians have died…ahm…19 Israelis including a couple of visitors have…ehm…have died as well. Inside the West Bank Jenin has been the focus of a lot of Israeli army raids. They say they were after a Hamas operative today whom they did manage to arrest but in the course of this…ehm…Shireen Abu Akleh – who from the video was clearly wearing a bullet proof vest with the word ‘press’ emblazoned upon it – was shot in the head and a colleague of hers was injured in the back. He appears not to be too seriously injured. As you say, Al Jazeera have said that this was a cold-blooded assassination. The Palestinian president Mahmoud Abbas has described it as an execution. Qatar, which owns the Al Jazeera network, says that it’s state sponsored terrorism. Israel disputes that: says that it came under fire – indiscriminate fire, it says – from dozens of Palestinian militants…ahm…but there are clearly two very different versions of events going around today.”

Stourton then brought up the topic of the reactions of “the press corps in Jerusalem” to Abu Akleh’s death and Franks’ response included more promotion of talking points from an Al Jazeera managing editor, without any explanation of that outlet’s record on Israel.

Franks: “But along with that, certainly from her employers, a measure of anger. This was Mohamed Moawad. He’s managing editor of the Al Jazeera news channel that employed Shireen.”

Recording Moawad: “We can’t start this dealing with a heinous crime by placing a blame on others. Under the international law the Israeli forces are responsible. They are there in an operation and a journalist wearing a helmet and the press vest accompanied by other journalists. One of her colleagues from a Palestinian media outlet was there watching the scene, that heinous crime happening on her.”

Franks: “Well the Israelis did offer a joint investigation with the Palestinians which the Palestinian authorities have turned down. In fact as far as I understand an autopsy on Shireen’s body is being carried out right now in the city of Nablus which is…lies further south in the West Bank. Her body will then be transported to Jerusalem. We’re expecting the funeral to take place either tomorrow – Thursday – or Friday. The Israelis have been trying to provide more information but they have come under very strong questioning from the press corps as to really whether their version of events stacks up and just how close Shireen might have been to incoming Palestinian fire, if indeed there were any at the time that she died.”

The additional three programmes aired on May 11th will be discussed in part two of this post.