A May 13th Guardian article avoids even the pretense of objectivity by completely omiting evidence of Palestinian violence at the funeral in Jerusalem on Friday for al-Jazeera’s Shireen Abu Aqleh, and failing to provide readers with Israel’s side of the story.

The piece, written by the Guardian’s US weekend editor Ramon Antonio Vargas, employs a headline (“US condemns Israel’s attack on Shireen Abu Aqleh’s funeral”) that, like many media outlets, frames what occurred as an Israeli “attack” of a funeral procession.  In the text of the article, Vargas actually describes events as an Israeli “storming” of the funeral procession.  Such tendentious and misleading language suggests thuggish, unprovoked Israeli violence on mourners, whilst obfuscating the fact that police were responding to Palestinian violence when they began using force – a clash which lasted about a minute.

Dozens of Palestinians were packed around the coffin, some waving Palestinian flags and chanting, “with our soul and blood we will redeem you Shireen”.

When they began walking toward the gates of St Joseph’s hospital, Israeli police officers, in an apparent attempt to stop them proceeding by foot rather than taking the coffin by car, burst through the courtyard gates and charged at the crowd. Some beat pallbearers with batons and kicked them.

At one point the group carrying her coffin backed against a wall and almost dropped the casket, recovering it just before one end hit the ground as stun grenades detonated.

However, detailed accounts, by reporters on the scene, published in the Washington Post and other outlets, official statements by Israeli police and video footage paint a completely different picture from what the Guardian is trying to sell.

First, here’s the account by Israeli police, who had coordinated the funeral procession with the family of Shireen Abu Aqleh beforehand: 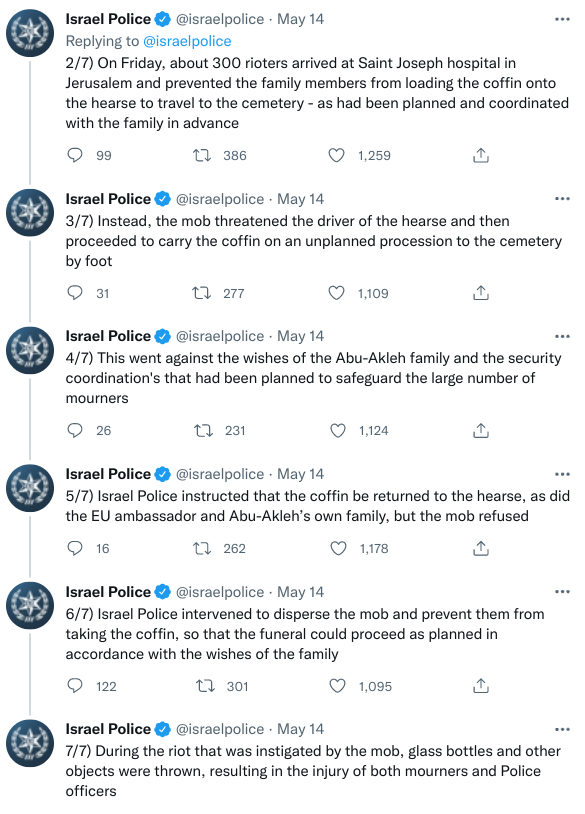 Meanwhile, the Washington Post’s account is consistent with the Israeli version: 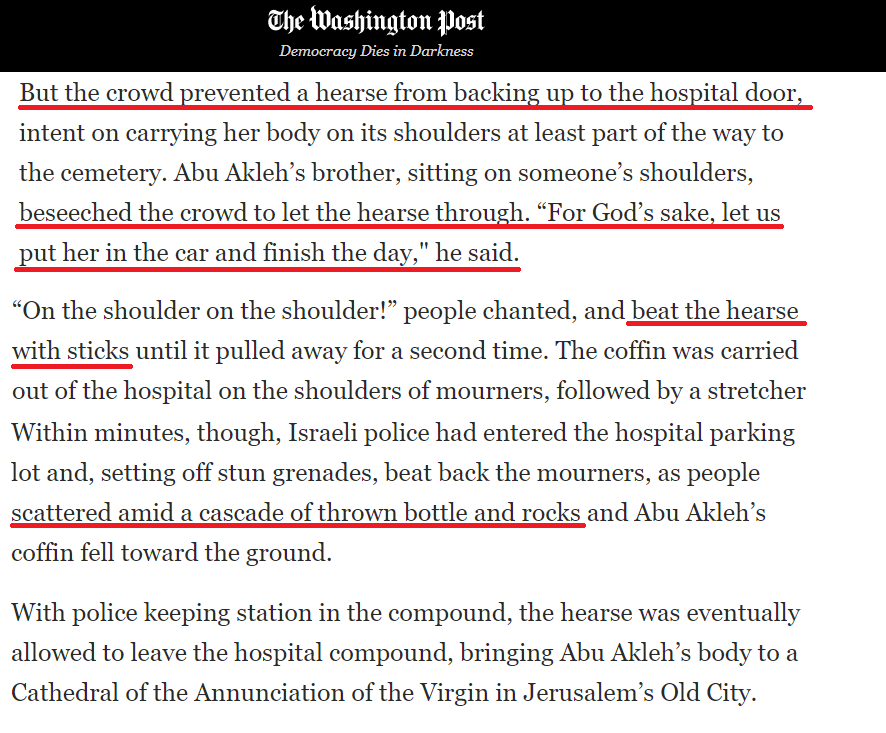 This footage corroborates that the stone throwing at police began prior to their charge:

Rioters hiding near and under the coffin after throwing stones and other objects at Israel Police officers in Jerusalem pic.twitter.com/SpnxM0uLre

This clip shows, in a fuller timeline, the throwing of objects at police, again, prior to the police charge:

Watch: Violence erupts as Al Jazeera journalist #ShireenAbuAkleh’s coffin emerges from a #Jerusalem hospital ahead of her burial procession.https://t.co/Q9anriHv7Y pic.twitter.com/WZ1NcKGxUn

Finally, this video, taken from a different angle, by Liran Tamari, a police affairs and legal reporter for Ynet, shows glass bottles being thrown (the sound of shattering glass can be heard).

Tellingly, the Guardian is the only mainstream outlet covering the funeral clashes we’ve seen that completely omitted the Palestinian violence that, again, preceded actions by Israeli police, and we’ve complained to editors asking that they amend the article accordingly.

Guardian on journalist’s death: Don’t bother us with facts. Israel is guilty.

Like Loading...
Tags from the story
Al Jazeera, Delegitimization, Guardian, Israel, Ramon Antonio Vargas, Shireen Abu Aqleh
Written By
Adam Levick
More from Adam Levick
Whilst it's true that Ilhan Omar has been the target of ugly...
Read More