The day after the death of Palestinian journalist Shireen Abu Akleh on May 11th in Jenin three items on that story appeared on the BBC News website’s ‘Middle East’ page.

Two of those items – one written and one filmed – were tributes from the BBC’s chief international correspondent Lyse Doucet.

The third was a written report currently headlined “Shireen Abu Aqla: UN chief appalled at Al Jazeera reporter’s killing” which, in addition to another tribute from Doucet, promoted unverified, unevidenced – and often inflammatory – statements from a variety of partisan sources:

“Palestinian Authority President Mahmoud Abbas said he held the Israeli government fully responsible for what he described as a “crime of execution”.”

“”We were going to film the Israeli army operation and suddenly they shot us without asking us to leave or stop filming,” Al Jazeera cited Mr Samoudi as saying. “The first bullet hit me and the second bullet hit Shireen.

“There was no Palestinian military resistance at all at the scene,” he added.”

The network called on the international community to hold the Israeli government and military accountable for the “intentional targeting and killing” of a journalist.

Qatar – which funds Al Jazeera – said it considered the killing a “heinous crime and a flagrant violation of international humanitarian law and a blatant infringement on freedom of media and expression”.

Mr Abbas condemned the shooting of Abu Aqla and Samoudi and alleged that it was “part of the occupation’s policy of targeting journalists to obscure the truth and commit crimes silently”.”

In addition to those two links to Al Jazeera content, the report also promoted a link to the May 11th ‘Newsday’ interview with Husam Zomlot which was previously discussed here.

While the report did go on to present Israeli statements on the incident, readers found no challenge to or questioning of the inflammatory and inaccurate allegations from Al Jazeera and others from the BBC itself.

The report currently online is one of multiple versions amended over a day. The original version of the report was published some three hours after the incident occurred and was headlined “Al Jazeera says reporter killed by Israeli forces”. 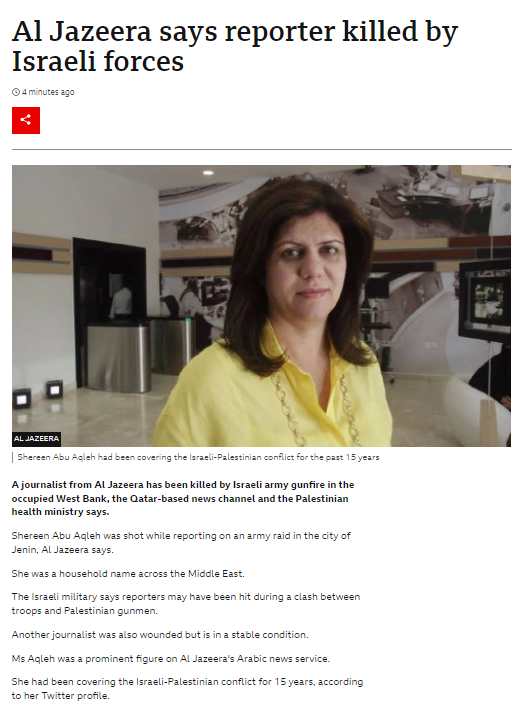 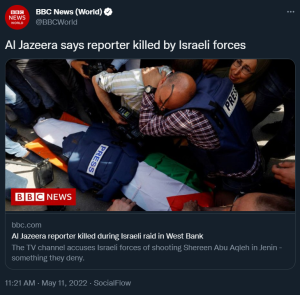 Clearly BBC editors were quite happy to promote a very serious allegation that they had not confirmed themselves, even though it came from a source with a long history of anti-Israel and anti-Jewish activity and ‘reporting’.

It was, after all, Al Jazeera which in 2008 threw a birthday party for the convicted terrorist Samir Kuntar. It was Al Jazeera which published the ‘Palestine Papers’ in 2011 and promoted the notion (copiously amplified by the BBC) that Yasser Arafat had been poisoned by Israel in 2012. In 2017 Al Jazeera turned its sights on ‘the Israel lobby’ in Britain and in 2019 it had to suspend two of its journalists over a Holocaust video. Just last year, the BBC uncritically amplified Al Jazeera statements relating to the targeting of a multi-storey building housing Hamas in the Gaza Strip while failing to report the award presented by Hamas to the head of Al Jazeera’s bureau there.

Nevertheless, Al Jazeera’s long record as an unreliable and ideologically conscripted source (along with supposed BBC standards of accuracy and impartiality) was obviously not enough to make BBC editors pause and demand any sort of independent investigation of their own before uncritically publishing the outlet’s latest unverified anti-Israel claims.