On the evening of June 14th a report by David Gritten headlined “European Union to unfreeze aid for Palestinians” appeared on the BBC News website’s ‘Middle East’ page.

Linking to an EU press release, the report tells readers that: 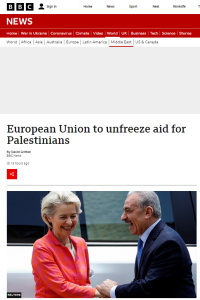 “The European Union is to release hundreds of millions of euros in aid to the Palestinians. […]

The hold-up was caused by concerns that Palestinian textbooks glorified violence and promoted anti-Semitism.

“All the difficulties are gone,” she told a news conference in Ramallah, in the occupied West Bank, without mentioning whether she had asked for any changes to the textbooks.”

“But since 2020 a large portion of the EU’s funding – valued at about €215m – has not been handed over because of officials’ concerns over Palestinian textbooks.

The European Commissioner for Neighbourhood and Enlargement, Olivér Várhelyi, said last July that the assistance should be conditional on the PA ensuring that all educational materials adhered fully to Unesco standards of peace, tolerance, coexistence and non-violence.”

Readers are not provided with any further information about the content of the Palestinian Authority produced school textbooks which were the topic of an EU report or given examples of content that had caused “concerns”. Neither are they told that some members of the European parliament had called for conditions to be set before funding was renewed, which apparently has not happened. Opposition to the move – as reported by the Algemeiner and others – is not reflected in the BBC’s report.

“The fight against resurgent antisemitism in Europe will be dangerously compromised when the EU resumes funding to the Palestinian Authority, a Dutch member of the European parliament has warned. […]

Ruissen argued that the resumption of aid would result in the further “poisoning” of the minds of Palestinian children. “In this way, we also make the fight against antisemitism here in Europe an empty shell,” he told the Dutch newspaper Trouw on Monday.

Another European parliamentarian, Anna Michelle Asimakopoulou, similarly criticized the decision. “Zero tolerance cannot just be a slogan,” the Greek MEP told Politico. “It needs to be reflected in our actions. This is a missed opportunity to effect much-needed change when it comes to the content of Palestinian textbooks.””

Gritten’s article promotes a report by Yolande Knell dating from March called “The cancer centre that can’t take patients” and goes on to state:

“The funding crisis has left the PA unable to pay full salaries for teachers, firefighters and doctors, and has prevented some Palestinians from getting essential medical care.

Ms von der Leyen said the EU was working to support the Palestinian people, especially the most vulnerable, and that it would mobilise €25m to improve food security in the Palestinian territories, which are heavily dependent on imports of cereals from war-torn Ukraine.”

As is usually the case in BBC reporting, readers of this report are told nothing about the Palestinian Authority’s financial priorities and the fact that while “teachers, firefighters and doctors” may not have received their full salaries, convicted terrorists did.

In 2020 the Palestinian Authority spent around $181 million (3.75% of its annual budget) on salaries for convicted terrorists. In 2021, the amount of money spent on rewarding terrorism was over $270 million – higher than the EU’s withheld donations.

The BBC has shown time and time again that when reporting on the Palestinian Authority’s perennial financial crises, it almost inevitably erases the very relevant issue of payments to terrorists and their families from the picture. As we see, this latest report is no exception.

SIMPLISTIC BBC REPORTING ON RENEWAL OF US FUNDING TO PALESTINIANS

HOW DID BBC NEWS REPORT RARE CRITICISM OF THE PA FROM THE UN?