On the afternoon of November 5th a report appeared on the BBC News website’s ‘Middle East’ page under the headline “Israel rebuked for ‘biggest demolition of Palestinian homes in years’”. 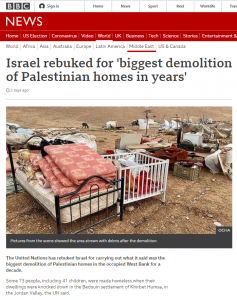 The report opens with statements made by an official at the UN agency OCHA – including a promoted link – but with no information provided to readers concerning that agency’s record, including its facilitation of funding to political NGOs and its own political activism.

“The United Nations has rebuked Israel for carrying out what it said was the biggest demolition of Palestinian homes in the occupied West Bank for a decade.

Some 73 people, including 41 children, were made homeless when their dwellings were knocked down in the Bedouin settlement of Khirbet Humsa, in the Jordan Valley, the UN said. […]

But the UN called the Israeli actions a “grave breach” of international law.

According to the UN Office for the Co-ordination of Humanitarian Affairs (Ocha), 76 structures – including homes, animal shelters, toilets and solar panels – were destroyed when Israeli bulldozers moved in late on Tuesday.”

The BBC’s claim that the events took place “late on Tuesday” is contradicted by B’Tselem which stated that bulldozers arrived around 11 a.m.

The BBC’s report goes on to cite (including an embedded Tweet) another inadequately presented organisation – the political NGO B’Tselem – and a report in the Ha’aretz newspaper before further amplification of the UNOCHA statement:

“Ocha said Khirbet Humsa, known as Humsa al-Bqaiaa in Arabic, was one of 38 communities fully or partially located within Israeli-designated “firing zones” and which constitute “some of the most vulnerable communities in the West Bank”.

It said such demolitions were “grave breaches of the Fourth Geneva Convention” – international law designed to protect civilian populations in occupied territories.”

A total of 218 words of the 336-word report were given over to presentation of the views and accounts of UNOCHA, B’Tselem and a resident of the Bedouin settlement quoted by Ha’aretz. The Israeli view of the story was afforded 63 words in three paragraphs scattered throughout the report.

“The Israeli military said the structures had been built illegally.”

“In a statement, the Israeli military body responsible for civilian affairs in the West Bank said the destroyed structures had been “built illegally in a firing zone”, or military training area.”

Fifty-five words at the end of the report were given over to ‘background’ which begins with the BBC’s standard selective portrayal of history and a distorted description of the Oslo Accords. [emphasis added]

“Israel occupied the West Bank in the 1967 Middle East war. Under subsequent agreements, Palestinians exercise limited self-rule in parts of the West Bank, while Israel has overall control.

Khirbet Humsa lies in an area outside of Palestinian control.

Palestinian communities in Israeli-administered areas complain that trying to obtain building permits there is often futile.”

The Palestinian Authority of course has complete control (rather than “limited self-rule”) over Area A and civilian control over Area B. The Bedouin encampment of Khirbet Humsa is located in Area C which, under the terms of the internationally recognised Oslo Accords signed by the PLO, is under Israeli control pending final status negotiations.

The BBC’s report makes no effort to inform readers that the encampment has been the subject of several court cases throughout the past decade. In 2019 the Supreme Court ruled that its residents have no property rights in the location (i.e. the land does not belong to them), which was declared an army training zone in 1972. The court further stated that the Bedouin are infiltrators on the land and that building there is unauthorised and illegal.

The BBC’s claim that “Palestinian communities in Israeli-administered areas complain that trying to obtain building permits there is often futile” is hence totally irrelevant to this story because – like anywhere else in the world – building permits are not granted to people who take over land illegally.

Interestingly, the BBC’s report makes no mention of the fact that some of the structures illegally erected in Khirbet Humsa were apparently constructed with European funding – including from the British Consulate in Jerusalem. 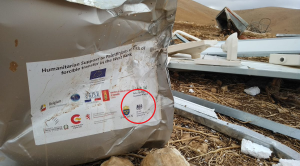 Newsreader: “Israel has been urged to stop demolishing Palestinian buildings in the occupied West Bank after its military razed a village of more than 70 people. The United Nations said the demolitions were aimed at coercing Palestinians into leaving their homes. Our Middle East correspondent Yolande Knell reports.”

Knell: “As winter begins about a dozen Bedouin families are now living in donated tents in the north of the Jordan Valley. One resident of the village of Humsa al Bakia said the Israeli army had given them only 10 minutes to leave their homes after bulldozers arrived late [sic] on Tuesday. The branch of the Israeli military responsible for civilian affairs in the West Bank says the destroyed structures were illegally built in an area it uses for training. Under Israeli law Palestinians can’t build in areas under full Israeli control without permits and these are typically refused. The UN envoy to the Middle East peace process called for Israel to cease demolition while the EU said they were an impediment towards progress on the two-state solution. The scale of the demolition, targeting an entire community at once, was unusual. The timing was questioned by the Israeli human rights group B’Tselem, which pointed out that world attention had been focused on the US elections.”

As we see, Knell uncritically amplified B’Tselem talking points without providing listeners with relevant information concerning that organisation’s “affiliations, funding and particular viewpoints”. As was the case in the written report, she failed to adequately clarify that the illegal settlement was located in Area C and that the issue of building permits is irrelevant in this case. She also avoided informing listeners that some of the illegal structures were constructed with foreign (including UK) funding – a point which may well have been of interest to the UK tax-payers listening to this report on BBC domestic radio.

OMISSION IN BBC REPORTING ON ISRAEL AND THE EU