Last month we noted the appearance of an inaccurate map in a BBC News website report: 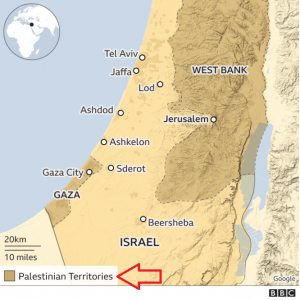 CAMERA UK submitted a complaint to the BBC on that matter, pointing out that:

“This report includes an inaccurate and misleading map which portrays all of Judea & Samaria as “Palestinian Territory” – including areas near Latrun defined in the 1949 Armistice Agreement as ‘no-man’s land’.

The BBC Academy style guide defines Palestinian Territories as “areas that fall under the administration of the Palestinian Authority”.

This map however also describes Area C as “Palestinian Territory” even though under the terms of the Oslo Accords signed by the Palestinians, the status of that area is subject to final status negotiations.

In other words, the map misleads audiences with a premature, speculative and inaccurate portrayal of the current status of territory which is subject to negotiations that have yet to take place.”

The first response was received from BBC Complaints on May 25th but did not address the points made.

“As part of a broader strategy to move BBC Academy training content to focus internally and on skills not editorial content we identified for removal a wealth of content, particularly the editorially led, internationally focussed style guides as these do not fit the remit of internal skills training which is now the strategic focus of the BBC Academy. The article you are referring to has been removed as part of this project along with a significant number of other pages on a wide variety of subjects.

If we may direct you also to the BBC Complaints framework:

…if you make a complaint about content currently published on a BBC website you should make it within 30 working days of the date when it first appeared online. The BBC may consider complaints received beyond that deadline but only if it is satisfied that there was a good reason for the delay, that the matter complained about was serious, as judged against the BBC’s editorial standards, and that it is practicable and cost-effective to investigate it and adjudicate upon it fairly.”

CAMERA UK hence submitted a second complaint on the same topic and received this reply on June 2nd:

“Your complaint is about a map which you say is inaccurate. However, the article which you have provided the link for does not include any maps so we are not able to answer your complaint which pertains specifically to a map. Please can you confirm to us where you have seen the map which you are raising a complaint about.”

The link we actually provided in that complaint (and the previous one) was this one – which leads to the article including the map which was the topic of our initial complaint.

CAMERA UK therefore submitted a third complaint on the same topic, once again including the same link. The response we received on June 14th reads as follows:

“Thanks for your further comments.

The map itself was a general one. It did not break down the West Bank into its different areas of control, and the three zones are all considered to be part of the Occupied Territories by the international community, irrespective of the arrangements on the ground, or any future agreement. Latrun, which you mention, was not marked.

But you have, in fact, quoted our guidance selectively.

The full entry on our public-facing site reads:

“Strictly speaking, the phrase Palestinian Territories refers to the areas that fall under the administration of the Palestinian Authority…”

It does not tell us not to use the phrase, and indeed the previous entry, which you do not mention, indicates the opposite.

Rather, it points to the fact that the Occupied Territories are commonly referred to as ‘Palestinian Territories’ by politicians, for example to explain why the construction of settlements is considered illegal by the UN.

The Foreign Office, for example, calls them ‘Occupied Palestinian Territories.’

As the guidance indicates, critics of the phrase say it is not strictly accurate for various reasons, including the fact that the West Bank was captured from Jordan in 1967.

But the guidance also points to the fact that the BBC Governors considered this issue some years ago. Their decision was that, although the complainant objected to references to ‘Palestinian land’ and ‘Arab land’, these terms “appropriately reflected the language of UN resolutions.”

For these reasons we disagree that the map is inaccurate.”

Beyond the all too obvious conclusions concerning the level of efficiency of the publicly funded BBC Complaints procedure, this exchange of correspondence clearly shows that the BBC is not interested in providing its audiences with factual information which would broaden their understanding of the background to the conflict it so extensively covers.

Rather, by means of what it describes as a “general” map, the BBC steers its audiences towards one particular narrative which it deems ‘accurate’ because it is used by “politicians” and “the [UK] Foreign Office” and was endorsed seventeen years ago by BBC Governors adjudicating on a specific complaint.

That narrative declares land which was allocated by the League of Nations to the creation of a Jewish national home and subsequently invaded and illegally occupied by Jordan for nineteen years to be ‘Palestinian”. That narrative turns armistice lines which were specifically defined as not being borders into borders. That narrative ignores the fact that the representatives of the Palestinians agreed in the Oslo Accords to negotiate the final status of Area C.

In other words, the League of Nations Mandate for Palestine, agreements signed between Israel and Jordan in 1949 and agreements signed between Israel and the PLO in the 1990s are all completely irrelevant as far as the BBC is concerned because it – along with some British politicians and civil servants – has already pronounced on the status of those territories regardless of what the actual parties concerned have agreed in the past or may agree in the future.