Writing at the Spectator, Stephen Daisley discusses the UK’s failure to recognise Jerusalem as Israel’s capital.

“Under Israeli law, Jerusalem ‘complete and united’ is ‘the capital of Israel’, a position affirmed by the United States and a number of other countries.

But not the UK, where the government recognises only ‘Israel’s “de facto authority” over West Jerusalem’, which is as slippery as all lawyer talk is. As recently as 2016, Foreign Office briefing documents were still referring to Jerusalem as corpus separatum. (You know your foreign policy has really kept up with the times when it requires a working knowledge of Latin.) Jerusalem was designated a corpus separatum in the 1947 Partition Plan for Palestine, which was adopted by the UN General Assembly, accepted by the Jews, and rejected by the Arabs, who went on to launch a war for ‘the elimination of the Jewish state’. You can see why the Foreign Office would consider this a totally reasonable and unproblematic basis for UK policy on the Middle East.

Originally, corpus separatum meant Jerusalem would be run by the United Nations. These days Israel wouldn’t trust the UN to run a shawarma stand, and rightly so. So corpus separatum, as used by the UK government, has come to mean split sovereignty in Jerusalem, with Israel controlling the western parts of the city and a future State of Palestine the eastern portions. Curiously enough, the government only seems to like parts of the doctrine. Somewhere along the way, the part of the 1947 plan that said corpus separatum could be put to a referendum of Jerusalem residents after ten years has fallen by the wayside.”

If all that sounds rather familiar, that is because the BBC has used exactly the same argument when challenged on its refusal to describe Jerusalem as Israel’s capital. 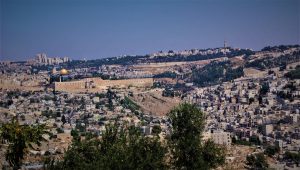 As noted here in 2014, in two responses to complaints on the issue, the BBC’s then Editorial Standards Committee wrote the following:

“The Committee noted that while there is no expectation that in a two-state solution West Jerusalem would become Palestinian territory, a UN resolution passed in 1947 has not been rescinded. It calls for the whole of Jerusalem to be an international city, a corpus separatum (similar to the Vatican City), and in that context, technically, West Jerusalem is not Israeli sovereign territory.”

In other words, like the FCDO, the BBC claims that the 1947 UN Partition Plan – UN GA resolution 181 – has some sort of relevance or validity today. However, like most UN General Assembly resolutions, 181 was non-binding and no more than a recommendation – the implementation of which depended upon the agreement of the parties concerned. As is well known, the Arab nations rejected the Partition Plan and threatened to use force to oppose it. The recommendation hence became a non-starter and its various clauses – including the corpus separatum proposal – irrelevant.

Notably however, both the BBC and the FCDO conveniently ignore the fact that the corpus separatum proposal to which they still cling did not only relate to Jerusalem but also included other places such as Bethlehem and Beit Jala, which they have no problem categorising as being in the “occupied Palestinian territories”.

Given the BBC’s history as an instrument of UK government ‘soft power’, its partnership with the FCDO in the operations of its charity ‘Media Action’ and its reliance on considerable funding from the FCDO to operate the World Service, it is hardly surprising to see it adopt the same tortured logic as the FCDO with regard to Israel’s capital city.

But beyond the absurdity of that anachronistic refusal to recognise reality, the main effect of the BBC’s lining up behind the exact same redundant corpus separatum claim used by the FCDO is to call into question the broadcaster’s supposed editorial independence.

WHY DOES THE BBC TRUST’S ESC PRETEND THAT THE 1947 PARTITION PLAN IS A THING?

BBC NEWS GETS ISRAEL’S CAPITAL CITY RIGHT – AND THEN ‘CORRECTS’