“The UN Human Rights Council has voted to investigate violence in the recent conflict between Israel and Hamas. […]

The text of the resolution, brought by the Organisation of Islamic Conference (OIC) and the Palestinian delegation, calls for a permanent Commission of Inquiry to be set up to report on rights violations in Israel, the West Bank and Gaza.

It also calls for the investigation of “all underlying root causes of recurrent tensions, instability and protraction of conflict”. […]

But the Palestinian foreign ministry said it reflected the “determination of the international community to move forward in the path of accountability, law enforcement, and protection of Palestinian human rights”.”

Seeing as the BBC has done remarkably little over the years to enhance audience understanding of the UNHRC’s politically motivated bias against Israel, that statement from the then Israeli prime minister may have been rather difficult for readers to understand.

Since that article was published the BBC News website has not published any further stand-alone reporting on that topic and so audiences are unlikely to be familiar with the names and records of the three members of that permanent commission of inquiry or the initial report it put out in June 2022.

The BBC did not provide any coverage of the subsequent discussion of that report at the UNHRC, which included highly problematic statements from members of the commission.

‘Navi Pillay, Chair of the COI, used her opening remarks to call for boycotting the State of Israel, claiming that the COI “will carefully assess the responsibilities of third states along with that of private and other actors in the continued violations and abuses of human rights law, and violations of international humanitarian law in Palestine and Israel. This includes, but is not limited to, the transfer of arms…” to Israel.

As reported by the Jerusalem Post, the third member of the commission, Miloon Kothari, recently gave an interview to the anti-Israel website ‘Mondoweiss’ which provided much insight into the approach of the supposedly ‘impartial’ commission. 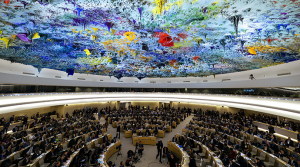 ‘“We are very disheartened by the social media that is controlled largely by – whether it is the Jewish lobby or specific NGOs,” said Indian human-rights expert Miloon Kothari.’ […]

“I would go as far as to raise the question of why are they [Israel] even a member of the UN,” Kothari said.’

Although BBC audiences have seen no coverage of that controversial commission of inquiry for over a year, at some point the BBC will no doubt get round to reporting its ‘findings’. As is usually the case, that reporting is likely be uncritical and unquestioning and based on the BBC’s past record, it is reasonable to expect that the publicly expressed bias of the commissioners will be ignored, just as the corporation repeatedly and uncritically amplified a statement from Michael Lynk concerning vaccinations against the Coronavirus.

It is past time for the BBC to adopt a critical approach to the UN Human Rights Council and to begin to produce accurate and impartial reporting which actually informs audiences about that body’s long-standing anti-Israel bias rather than merely unquestioningly promoting ‘what the United Nations says’.