Readers may recall that the BBC failed to report the April 29th terror attack in Ariel in which 23-year-old Vyacheslav Golev was murdered.

In the days and weeks that followed, BBC audiences did not see any coverage of subsequent events relating to that attack, including the claim of responsibility by Hamas, the arrests and indictments of the suspected perpetrators and a family member suspected of helping them or the High Court’s rejection of appeals against the demolition of their houses.

However, when those demolitions – and related rioting – took place on July 26th, the BBC Jerusalem bureau’s Tom Bateman did find that particular news worthy of communication to his thirteen thousand Twitter followers. 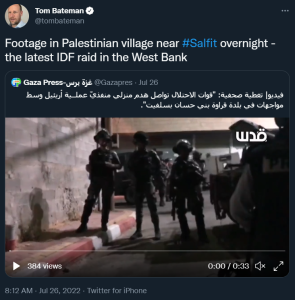 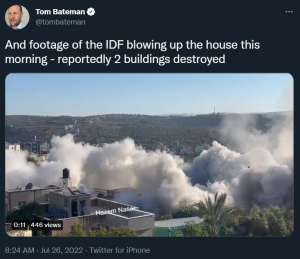 Bateman’s use of the word “punitive” suggests that he did not familiarise himself with the High Court ruling on the matter.

“In his ruling, Justice Yosef Elron said the demolition of houses was meant to prevent future attacks and save lives and was thus acceptable.

“The demolition of the appellants’ homes is not meant to punish them for the actions of the terrorists or as means of ‘revenge,’ but to save the lives of others, and to prevent other families from experiencing the terrible anguish inflicted on Vyacheslav Golev’s family,” Elron said.” [emphasis added]

Notably, the source of the information promoted by Bateman in his first Tweet – ‘Gaza Press’ – does not appear to meet the standards laid out in the BBC’s editorial guidelines on accuracy.

“3.3.13 Material supplied by third parties, including news providers, needs to be treated with appropriate caution, taking account of the reputation of the source.” [emphasis added]

‘Gaza Press’ appears to be something of a one-man show run by a person named Amin Khalaf based in the Gaza Strip. If Tom Bateman did indeed take into account “the reputation” of that source before promoting its Tweet then he must be aware of the fact that it glorifies terrorism, as shown for example in Tweets concerning the attacks in Be’er Sheva and Bnei Brak in March. 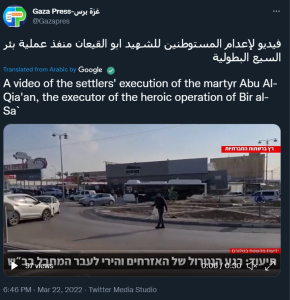 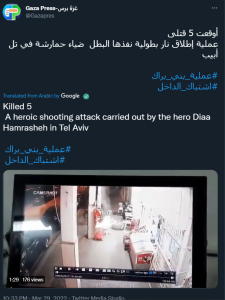 Either Bateman is unperturbed by the fact that the source of the information he promotes is a supporter of terrorism against Israeli civilians or this is yet another example of English speaking BBC staff compromising the corporation’s reputation due to a lack of Arabic language skills.