On July 27th the IDF Southern Command held a briefing for members of the local and foreign press which included the topic of Hamas military assets located in civilian areas in the Gaza Strip.

“Among the sites disclosed to journalists on Wednesday was a tunnel used to store weapons and move fighters in Gaza City’s Tuffah neighborhood next to a now-closed Pepsi factory that closed following last year’s war as well as close to a UNRWA elementary school which is used as an emergency shelter for some 2,500 people in times of hostilities.

Another tunnel used by Hamas in the Zabara neighborhood of Gaza City identified by the IDF on Wednesday is under a UNWRA school and a central ambulance center with 14 ambulances as well as a medical equipment storage complex. The tunnel also runs under a church and schools that are used as shelters during hostilities.

Another site is a tunnel entry shaft that was exposed during last year’s conflict near the al-Azar university in Gaza City which has about 20,000 students. According to the IDF, the tunnel entry shaft leads to a network of subterranean tunnels that branches throughout the Tel-Hawa area southwest of Gaza City and is also close to a police station, a UNWRA school, medical clinic, mosque, a community center and UNRWA’s headquarters in the area.

According to the IDF, Hamas has a munition production facility located in a building that is also used as a residential building. The site, which contains explosives and flammable material that would cause extreme damage should it explode, is 45 meters from a mosque, 55 meters from a UNRWA clinic that is used as a triage and primary screening center, and 60 meters from Shifa hospital.”

While the BBC has produced numerous reports concerning Shifa hospital in the past – mainly to promote the topic of shortages of medical supplies or to amplify false allegations of targeting of medical facilities – it has been notably less forthcoming on the subject of Hamas’ use of that hospital as a shelter for senior officials and headquarters.

Whether or not any BBC journalists attended that IDF briefing is not known to us but the information was also put out as a press release and has been amply reported by the local English language press and on social media. 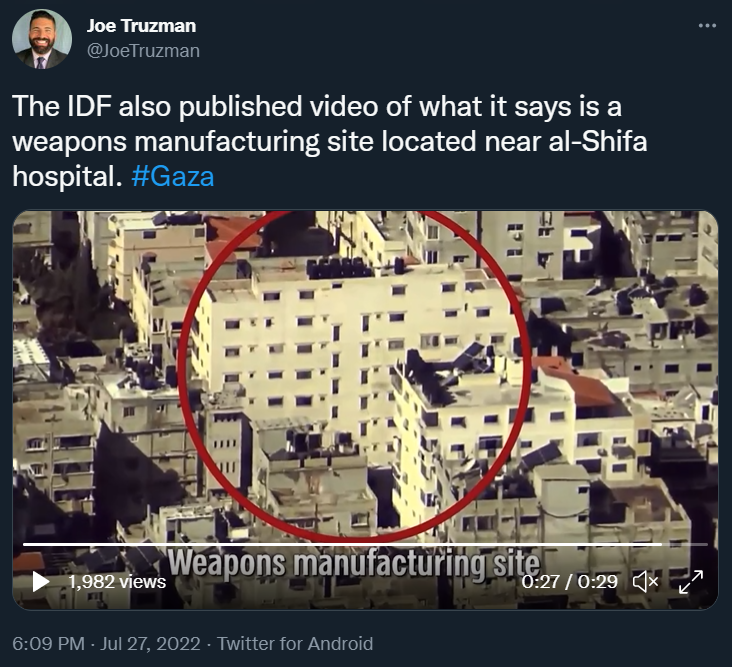 What is clear however is that BBC audiences have to date seen no reporting whatsoever on that topic. As noted here in May 2021, unlike other media outlets the BBC provided its audiences with very little information concerning the Hamas tunnels which were destroyed during Operation Guardian of the Walls that month.

“The BBC’s avoidance of any significant reporting on that tunnel system is especially notable in light of the fact that it did produce reports on civilian casualties which – as BBC journalists know – resulted from the collapse of buildings above the tunnels that Hamas had constructed in recent years.

It is also noteworthy because following the 2014 conflict, the BBC ignored Hamas’ previous misappropriation of construction materials for the purpose of tunnel building and the related failure of supervisory international bodies to ensure that those materials went solely to civilian construction projects.”

And so once more BBC audiences will lack information essential for full understanding of any future Israeli operation in the Gaza Strip and its consequences for the civilian population.