On November 27th the BBC News Channel aired a “breaking news” item concerning the assassination of Mohsen Fakhrizadeh near Tehran.

The item consisted of a conversation between presenter Babita Sharma and Majid Afshar of the BBC Persian service during which (from 03:00) viewers heard the following: [emphasis in italics in the original, emphasis in bold added] 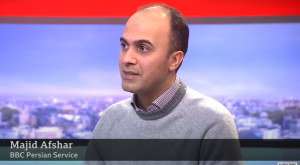 Sharma: “…there’s very little known about him [Fakhrizadeh] in terms of public profile. You were saying that the picture behind us here is just one of a couple.”

Afshar: “One of probably two pictures. We only have…we have only seen two pictures of him. This is one of them. The other one is the one Israeli prime minister Benjamin Netanyahu usually uses at his press conferences. Two years ago when he was using a picture he said ‘remember this name because you are going to hear about him a lot more’.”

Afshar (who has apparently not put very much effort into trying to find additional pictures of Fakhrizadeh) is referring is a press conference given by Netanyahu in April 2018 concerning files relating to Iran’s nuclear programme. The transcript and video of that press conference show that Afshar has fabricated the highlighted part of that quote. Here is what Netanyahu actually said:

“There’s another document from the archive. This is following the new directive of Iran’s Minister of Defense, Mr. Shamkhani, today he’s the director of the National Security Council. Following the new directive of Iran’s Minister of Defense, the work would be split into two parts, covert and overt. A key part of the plan was to form new organizations to continue the work. This is how Dr. Mohsen Fakhrizadeh, head of Project Amad, put it. Remember that name, Fakhrizadeh. So here’s his directive, right here. And he says: “The general aim is to announce the closure of Project Amad,” but then he adds, “Special activities”—you know what that is—“Special activities will be carried out under the title of scientific know-how developments.” And in fact, this is exactly what Iran proceeded to do. It continued this work in a series of organizations over the years, and today, in 2018, this work is carried out by SPND, that’s an organization inside Iran’s Defense Ministry. And you will not be surprised to hear that SPND is led by the same person that led Project Amad, Dr. Fakhrizadeh, and also, not coincidentally, many of SPND’s key personnel worked under Fakhrizadeh on Project Amad.” [emphasis added]

One would of course expect BBC employees to refrain from inventing quotes in order to advance their chosen narrative just as one would expect them to have sufficient command of the English language so as to avoid a phrase – “usually uses at his press conferences” – which suggests to audiences that the Israeli prime minister routinely holds briefings pertaining to Fakhrizadeh.

The ‘it must be Israel’ narrative promoted by Afshar continued later on (from 04:25) in the item:

Afshar: “We had like a decade ago a number of top nuclear scientists in Iran were killed. At the time it was…the Iranians blamed the Israelis. The Israeli officials have got a policy of not confirming and not denying – a policy which we expect they would use in the coming days probably. But as you heard, the Iranian foreign minister is already pointing the finger at the Israelis because as I said…like we had another report two month ago about Israeli officials or…they had ordered – this is a New York Times report that’s saying that they killed Al Qaeda number two in Tehran like two months ago and then we learned about it two weeks ago that it was the Israeli officials who ordered that assassination on behalf of the Americans.”

The story to which Afshar refers was reported by the BBC on November 14th and is based entirely on a New York Times report which itself relies on unidentified sources. That report opens: [emphasis added]

“Al Qaeda’s second-highest leader, accused of being one of the masterminds of the deadly 1998 attacks on American embassies in Africa, was killed in Iran three months ago, intelligence officials have confirmed.

Abdullah Ahmed Abdullah, who went by the nom de guerre Abu Muhammad al-Masri, was gunned down on the streets of Tehran by two assassins on a motorcycle on Aug. 7, the anniversary of the embassy attacks. He was killed along with his daughter, Miriam, the widow of Osama bin Laden’s son Hamza bin Laden.

“Iranian officials did not respond to a request for comment for this article. Spokesmen for the Israeli prime minister’s office and the Trump administration’s National Security Council declined to comment.”

Readers – including the BBC – are given no information whatsoever concerning the identity of those anonymous “officials”, which organisation they represent, their reliability or why they supposedly suddenly had an interest in giving the New York Times information about a three month-old event.

The BBC claims to be “a provider of news that you can trust”. The fact that it is happy to advance a narrative by means of second-hand statements attributed to anonymous sources that it clearly has not independently verified obviously seriously undermines that claim. The fact that a BBC journalist would go so far as to fabricate part of a quote in order to further promote that framing should raise a red flag. The fact that the BBC’s chosen – and exclusive – narrative concerning the Fakhrizadeh assassination is identical to the so far unevidenced one promoted by the Iranian regime should be a serious cause of concern to a corporation already plagued by low rankings on impartiality.