On the evening of October 8th a fatal shooting attack took place in Jerusalem:

“A terrorist opened fire in the direction of a security checkpoint at the entrance to the east Jerusalem neighborhood of Shuafat on Saturday evening, killing 18-year-old female Military Police officer Noa Lazar, and severely wounding a 30-year-old security guard.

Early Sunday morning, Hadassah Medical Center spokespersons reported that the security guard was on a ventilator and under sedation in the neurosurgical intensive care unit after undergoing surgery overnight.”

BBC audiences saw no coverage whatsoever of that terror attack at the time.

Another fatal attack that took place on October 11th was likewise not reported by the BBC when it took place.

“A soldier was killed in a drive-by shooting near the Shavei Shomron settlement in the northern West Bank, the IDF said Tuesday afternoon.

Twenty-one-year-old St.-Sgt. Ido Baruch, who served in the elite Sayeret Givati unit, was initially described as being in moderate condition with gunshot wounds to the upper body, but his condition deteriorated en route to Meir Medical Center in Kfar Saba.

Video reportedly from the scene showed at least one attacker fleeing in a black car toward the Palestinian village of Deir Sharaf. The Lions’ Den militant group from the nearby city of Nablus reportedly took responsibility for the attack.”

On October 13th the BBC News website published a report by its Jerusalem bureau correspondent Tom Bateman in the ‘features’ section of its Middle East page.  Titled ‘West Bank pressures grow amid Israeli closures’, that article includes the only mention to date of the two above fatal terror attacks – notably without identification of the victims: 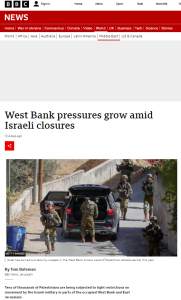 Israel’s security crackdown comes as it vows to continue a search for gunmen who killed the soldiers. […]

Many residents of Shuafat – a huge refugee camp cut off from the rest of the city by Israel’s separation barrier – have been unable to leave since Saturday night, when a Palestinian man armed with a pistol shot dead an 18-year-old Israeli soldier at a checkpoint. […]

Earlier this week, an Israeli soldier was shot dead by a Palestinian gunman near a Jewish settlement near the city of Nablus.”

Readers may recall that last month an incident in which an IDF soldier was shot and killed by Palestinian terrorists similarly went unreported for over two weeks until it was briefly mentioned in another report by Bateman (and an additional fatal attack was not covered at all). That report is repromoted in this latest article by Bateman, along with another from July.

As in that repromoted report, Bateman again focuses audience attentions on reports of the deaths of “Palestinian teenagers” while failing to provide the full stories, including any affiliations to terrorist organisations:

“On Wednesday the Palestinian health ministry announced the death of an 18-year-old Palestinian shot by Israeli forces in al-Aroub refugee camp near the city of Hebron.

The army said it opened fire at Palestinians throwing stones at cars, but didn’t say why it was necessary to use lethal force to stop this. […]

On 7 and 8 October, Israeli forces killed four Palestinian teenagers during a series of incidents in the West Bank within 24 hours. They included a 14-year-old boy shot dead near the separation barrier. The army claimed soldiers had fired at a Palestinian who threw petrol bombs at them.

On Monday, a 12-year-old Palestinian boy died of his wounds after being shot during an Israeli raid in Jenin in September.”

Readers may recall that Bateman similarly questioned the use of force against people carrying out potentially lethal attacks against motorists in the report he wrote less than two weeks before this one.

Bateman’s focus in this report is on “restriction of movement”, with its opening paragraphs reading:

“Tens of thousands of Palestinians are being subjected to tight restrictions on movement by the Israeli military in parts of the occupied West Bank and East Jerusalem.

The closures are taking place amid a fresh wave in violence across the occupied territories.”

He later describes restrictions in Shuafat and Nablus, both of which – as Bateman obviously knows – were implemented as part of the search for the terrorists who carried out the two above-mentioned fatal attacks.

“In Shuafat, Israeli security forces have been raiding homes searching for the gunman who carried out Saturday’s attack, with the area largely blockaded for six consecutive days. […]

Israeli forces on Thursday continued to close roads into Nablus, while severe restrictions on movement have also been reported for Palestinians in the nearby town of Huwara. A witness told the BBC of hours-long queues to pass checkpoints in the area.”

“…Palestinians say the heightened military closures amount to people in some areas being effectively “imprisoned”. […]

Medhat Debeh, a Palestinian lawyer who lives in the camp, described huge queues of traffic trying to get out on Thursday. He claimed a limited reopening in the morning was a show to appease foreign diplomats.

“There are people suffering from diseases that have relapsed because they were prevented from receiving the necessary treatment,” he told the BBC.”

Also notable is Bateman’s re-amplification of a misleading narrative concerning Operation Guardian of the Walls:

Several neighbourhoods saw a night of confrontation similar to those that broke out over several weeks in May last year, which partly fuelled a much bigger conflict.”

As we have repeatedly documented in recent months, the BBC has to date failed to provide its audiences with information which would enhance understanding of the multiple factors that lie behind the rise in violence emanating from Palestinian Authority controlled areas in Judea & Samaria:

Bateman’s sole nod to that crucial context in this latest report reads as follows:

“There has been growing violence in the north of the West Bank this year amid Israeli military raids and a collapse in security control by the Palestinian Authority (PA) which has limited powers to govern Palestinian cities.”

Once again we see that the BBC prioritises reporting on Palestinian casualties from specific age-groups over providing its audiences with a comprehensive picture of the factors that lie behind the rise in violence, including foreign funding for Palestinian terror, weapons smuggling, Hamas’ efforts to incite violence, the failure of the Palestinian Authority to meet its Oslo Accords obligations regarding terrorism, the uptick in involvement in terrorism by members of the PA security forces and Fatah’s Al Aqsa Martyrs Brigades and the exploitation of minors for the purposes of terrorism and violence.