On the evening of November 17th the BBC News website published a report headlined ‘Gaza: At least 21 killed in Jabalia refugee camp fire’ on its ‘Middle East’ page. Credited to “Rushdi Abu Alouf in Gaza City and George Wright in London”, the report relates to a tragic incident earlier that day in which a fire at a residential building in the Gaza Strip resulted in multiple casualties. 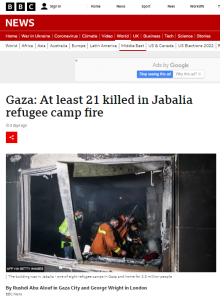 Most of the report deals with the incident itself but towards its end, readers find the following:

“Deadly fires – often caused by candles – have become a regular occurrence in Gaza because of severe power shortages. These are linked to the blockade imposed on the territory by Israel and Egypt as a security measure against militants there, and internal Palestinian political disputes.”

As we all too often have cause to note on these pages, the long-running power shortages in the Gaza Strip are not the result of Israeli or Egyptian counter-terrorism measures.

In 2017 the BBC Jerusalem bureau’s Yolande Knell was able to produce accurate reports on the background to that chronic issue in which she explained that:

“Behind the crisis is an escalating political power struggle between the Islamist group, Hamas, and the Palestinian Authority (PA), dominated by the rival Fatah movement.”

That has not however prevented the BBC from continuing to promote the myth that power shortages in the Gaza Strip are the fault of “the blockade” while avoiding the relevant issue of what this report euphemistically describes as “internal Palestinian political disputes”.

In fact, not only is the diesel fuel needed to run the inadequate Gaza power plant transported into the Strip via Israel, but Israel also supplies the Gaza Strip with around 125mw via ten power lines. The supply of electricity from Egypt appears to have halted in recent years. 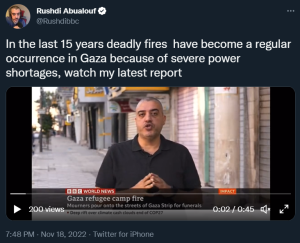 As we see, Abu Alouf and Wright’s report nevertheless promotes false linkage between “deadly fires” and “the blockade”.

That editorial decision became all the more remarkable three days after the incident when the Gaza Strip’s attorney general suggested that the fire that is the subject matter of this particular report was caused by “a party trick involving gasoline“.

The BBC’s report was later amended to include closing paragraphs on the topic of population density.

“Gaza is home to 2.3 million people, one of the highest population densities in the world. According to the UN, almost 600,000 refugees in Gaza are living in eight crowded camps.

On average, there are more than 5,700 people per square kilometre – very similar to the density of population in London – but that figure rises to more than 9,000 in Gaza City.”

No explanation of the political motives that lie behind the fact that people living in an area which has been under exclusive Palestinian control since 2005 are still classed as refugees and continue to live in “crowded camps” is provided to readers.

Not for the first time we see the BBC promoting redundant and unhelpful themes as a means of framing a story from the Gaza Strip, despite its supposed commitment to accurate and impartial reporting.