An article by the Guardian’s Jerusalem correspondent Bethan McKernan (“Teenager dies and 22 injured in twin rush-hour blasts in Jerusalem”, Nov. 23) concluded with the following sentences:

Israel has occupied East Jerusalem, the West Bank and Gaza Strip since 1967. The country’s steady drift to the right, along with an impotent Palestinian Authority and the emergence of a new generation of Palestinian fighters, means a return to peace talks is highly unlikely.

So few words. So much misinformation.
McKernan’s decision to airbrush Israel’s unilateral 2005 withdrawal from Gaza from the history of the conflict is extraordinarily deceptive – allowing her to promote a broader ahistorical narrative.
The country’s “drift to the right” – which can more accurately be described as the electorate’s increased skepticism over Oslo-era assumptions that withdrawing from land necessarily brings peace – can’t be understood without context surrounding the events following the Gaza withdrawal: the rise of Hamas and the terror group’s bombardment of thousands upon thousands of rockets at Israeli civilians. 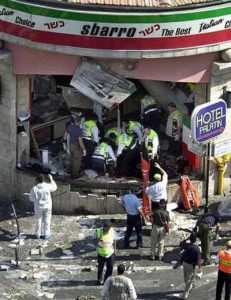 Equally as important to understanding Israel’s shift regarding the Oslo assumption is the incalculable trauma of the 2nd Intifada – a bloody five year campaign of Palestinian terror that claimed over 1,000 Israeli lives, maiming thousands more.
Nobody can possibly understand the current state of the ‘peace process’ without appreciating the impact of the Intifada and the aftermath of the Gaza withdrawal – bookended, of course, by the Palestinian rejection of Israeli peace offers in 2000/01 and 2008.
The Guardian editor responded to our complaint over McKernan’s characterisation of Gaza as “occupied” by citing a report by the totally discredited “Independent International Commission of Inquiry on the Occupied Palestinian Territory, including East Jerusalem, and in Israel” (“COI”) claiming Gaza is still effectively occupied.
Further, they told us that their international desk believes that the “2005 disengagement, while relevant context when discussing Gaza in more detail, [does] not need to be cited in every story that refers to the Gaza Strip among the occupied territories”.