One of the many articles published in early November by the Guardian about the Swiss report on the death of Yasser Arafat concluding that the late Palestinian leader was likely poisoned – a theory contradicted by a subsequent  French report – was penned by Harriet Sherwood, and titled ‘Arafat polonium find likely to be another hurdle for peace talks‘.

Sherwood’s story strangely argued that the Swiss findings were “likely to worsen the already corrosive atmosphere of the faltering peace negotiations and fuel popular demands that the Palestinian leadership walk out”, and, we noticed after reviewing the article again, this even more curious conclusion about Palestinians.

Arafat was a man who divided the world: revered by Palestinians and their supporters, reviled by Israel and its allies. Nine years after his death, a portrait of him still hangs in most Palestinian homes. Nonetheless, the Palestinian people have inevitably moved on. Acts of violence, espoused by Arafat, are rare in the West Bank, and rocket fire from Gaza has dropped; instead, the Palestinian leadership has invested its hopes in diplomacy and negotiations.

The broad suggestion that Palestinians have largely abandoned Arafat’s ‘strategy’ of terrorism represents an almost staggering distortion based on empirical data on the quantity of terror attacks since his death.  (In 2005 alone, 2,990 Palestinian terror attacks were recorded.)  Further, though such attacks have decreased overall in comparison to the height of the 2nd Intifada, this reduction is largely attributed to the construction of Israel’s security fence and more effective counter-terror measures, not changing Palestinian attitudes towards terror.

Additionally, Sherwood’s claim that “acts of violence…are rare in the West Bank” is also simply not true.  As BBC Watch’s Hadar Sela recently reported, “statistics provided by the ISA [Israel Security Agency] for the months July to November 2013 shows that the number of terror attacks taking place in Judea and Samaria [the West Bank] and Jerusalem since the renewal of direct negotiations between Israel and the PLO on July 29th has more than doubled”.

Sherwood’s additional claim that “rocket fire from Gaza has dropped” is also extremely misleading.  As the graph below on rocket attacks from Gaza demonstrates, rocket attacks from Gaza increased dramatically since Arafat’s death in 2004 (and Hamas’s control of the Strip in 2006).   While rocket attacks did decrease following the Gaza war (Cast Lead) in 2008-09, they increased again each year after the conflict until Israel launched an eight-day war in November 2012 (Pillar of Defense).

Beyond the statistical evidence contradicting Sherwood’s specific claims, it’s hard to understand how anyone covering the region as long as she has could possibly come to the conclusion that Palestinians have in any way abandoned terrorism.  In addition to the Palestinians’ glorification of terrorists, a comprehensive report on Arab public opinion by Pew Global in September demonstrated that “support for suicide bombing and other violence aimed at civilian targets is most widespread in the Palestinian territories“.  A staggering 62% of Palestinian Muslims, per this poll, believe that such attacks “are often or sometimes justified in order to defend Islam from its enemies”. 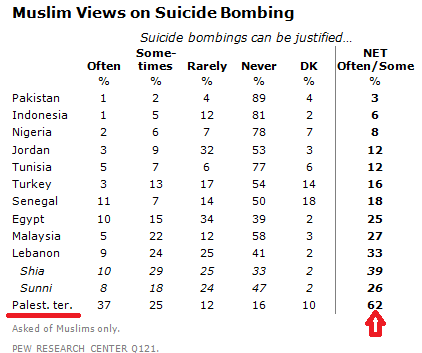 Though we’ve, on occasion, noted reports by Sherwood which suggest a modest amount of improvement in her coverage of the region, the amount of disinformation conveyed in those two sentences we cited (on Palestinian attitudes towards terror) again reminds us that her pro-Palestinian sympathies will trump a sincere commitment to accuracy almost every time.