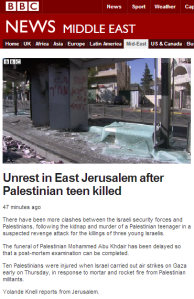 The synopsis to the report as it appears on the website opens:

“There have been more clashes between the Israeli security forces and Palestinians, following the kidnap and murder of a Palestinian teenager in a suspected revenge attack for the killings of three young Israelis.”

Yet again, insufficient effort is made by the BBC to clarify to audiences that so far, no evidence has been made public by the authorities investigating the incident which would support the unproven speculations promoted by Palestinian sources and extensively amplified by the BBC, among others.
Against background footage of damage to the Jerusalem light rail system, Knell opens by using the neutral term “clashes” to describe what is in fact violent rioting.

“The smouldering aftermath of overnight clashes. Palestinians in East Jerusalem vented their anger over the death of a local boy. Stones were their ammunition against Israeli police.”

Knell neglects to inform audiences that in addition to the “stones” she mentions, fire-bombs, improvised explosive devices and other means were also employed by the rioters. She also refrains from informing them what the graffiti sprayed on the light rail shelter in Israel’s capital city – as shown in her report’s footage – reads:  ‘Death to Israel’. ‘Death to Jews’. ‘Price Tag’.

“The body of Muhammed Abu Khdeir, who was seventeen, was found in a forest yesterday just hours after he was seen being bundled into a van. Israeli police say they’re still investigating, but his family believe that he was abducted and killed in revenge for the recent murder of three Israeli teenagers.”

Again, it is not adequately clarified to viewers that so far no factual evidence has been presented which would support the family’s speculations. Stating the obvious, Knell continues:

“The funeral can’t take place until an autopsy is done.”

The report then cuts to an interview with the boy’s father.

“He was stabbed multiple times and burnt. We weren’t allowed to see the body. They had to use DNA to identify my son.”

“Now mourners wait for the funeral outside the family home. Everywhere you look you’ve got plenty of evidence of the overnight violence, but it reached much further than East Jerusalem. There were also clashes in Palestinian cities across the West Bank, where the Israeli army’s been doing raids, and in the Gaza Strip.”

Knell makes no effort to inform viewers that those “raids” are part of efforts being made to apprehend the murderers of the three Israeli teenagers whose bodies were discovered in Halhul on June 30th. She continues:

“Explosions lit up the night sky in Gaza. This was Israel’s response to the rockets fired by militants. In southern Israel homes were hit. No-one here was injured.”

The report cuts to an interview with a Sderot resident named as Avihai Giorno.

“It’s impossible to start the day without fear and the children, even though I tell them not to be afraid, when it reaches you it changes everything – the whole situation.”

Indeed, luckily there were no physical injuries that particular morning in Sderot, even though thirteen missiles exploded in the area between midnight and 9 a.m alone on July 3rd and two houses took direct hits, including that of the man interviewed. One of those houses was used as a nursery for toddlers, but Yolande Knell apparently did not consider it necessary to provide viewers with that information.
Knell ends her report with what is rapidly becoming standard BBC promotion of a view of events in the region as a “cycle of violence”.

“The cycle of violence is a familiar pattern in this decades-old conflict but the latest developments are a worrying sign of a potential escalation.”

It is worth taking a look at what the BBC’s promotion of a “cycle of violence” – or “tit-for-tat” as it has been described in other recent reports – actually conveys to its audiences. Such presentation suggests symmetry between the two sides, inevitability and equal responsibility on the part of the parties involved.
But in fact, the recent significant rise in missile fire by terrorist organisations in the Gaza Strip – the majority of which was not reported by the BBC – began as searches commenced on June 12th for the three missing Israeli teenagers. Israeli responses to that missile fire were caused by the decision made by terrorist organisations to carry out those attacks against civilians the Israeli government is obliged to protect. Had those attacks (some 130 missiles in three weeks) not been carried out, there would of course have been no Israeli response.
Similarly, had terrorists not decided to kidnap and murder three Israeli teenagers, there would have been no searches for them in Hebron and other PA-controlled areas and no “clashes” as Yolande Knell euphemistically terms the organized riots and violence aimed at disturbing those searches. Likewise, had the residents of Shuafat chosen to express their anger and grief in a non-violent manner – and perhaps even to assist (or at least not hinder) the police with their inquiries rather than taking to the streets to carry out violent rioting, there would currently be no riot-control personnel on Jerusalem’s streets.
Curiously though, the BBC affords no agency to terrorists who chose to launch of missiles or to mobs rioting in the streets, preferring instead to present a patronizing picture of a Palestinian people controlled by an outside force: a “cycle of violence”. That policy of course actively hinders BBC audiences’ ability to properly understand events.