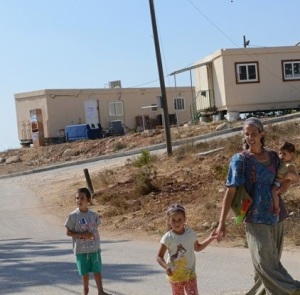 News media often refer erroneously to the West Bank as “Palestinian land” or “Palestinian territory” and Israeli acquisition or development there often get reported as “land grabs.”

For example:
Referring to Israel’s decision to declare almost 1,000 acres adjacent to the West Bank community of Gva’ot as state land, The Guardian (U.K.) wrote, “Israel has published tenders to build 283 homes in a West Bank settlement, days after announcing its biggest land grab on occupied Palestinian territory [emphases added] for three decades.” (“Israel to build 283 homes in West Bank”, Sept. 5, 2014)
USA Today, by contrast, eschewed hyperbole for context. Special Correspondent Michele Chabin reported of Gva’ot and the newly-designated state land that “this community of 17 Israeli families, apartments for disabled adults, a school for disabled children, several horses and a petting zoo is accustomed to solitude. So [Rachel] Pomerantz, who rents a small prefab home here, was surprised by the sudden international attention on the settlement since … the Israeli government announced it would designate a swath of land next to Gva’ot as state-owned property.”
Gva’ot is close to the 1949 Israeli-Jordanian armistice line and the adjacent 988 acres at the center of the media-diplomatic dust-up lie between it and the Gush Etzion settlement bloc just south of Jerusalem. As USA Today tells readers, “the Gush Etzion bloc’s core communities [in the West bank] were founded before Israel’s establishment in 1948 on land purchased by Jews in the 1920s and 1930s.
“Arab soldiers destroyed the communities when they fought against Israel’s founding during the 1948 war” (“Quiet strip of land, a loud dispute”, USA Today, Sept. 5, 2014)
“To Pomerantz,” Chabin wrote, “the international outcry doesn’t take into account Jews’ religious and historical ties to the West Bank. Gva’ot appears in the Old Testament [Hebrew Bible], and ‘the biblical land of Israel is inseparable from the state of Israel,’ she said.
“ ‘On a practical level,’ Pomerantz added, ‘there is an acute shortage of housing, so construction is vital.’ ”
A picture of Pomerantz walking with her children [seen above] helps personalize the story for readers.
Additionally, a map accompanying the article showed Gva’ot’s location sandwiched between the Gush Etzion block and Israel proper. Most Israelis expect the block to remain part of Israel in any agreement with the Palestinian leadership. A small inset map showed tiny Israel in comparison to the rest of the Middle East. The two maps together amount to a visual commentary that perhaps there has been exaggerated international focus on Israel’s designation of the adjacent land territory, about the size of four or five Midwestern farms, as state land.
The Guardian’s “Palestinian territory” description contradicts the basics. Since the end of Ottoman rule in 1917 no country has been recognized as sovereign over the West Bank. It remains disputed land taken by Jordan in a war of aggression in 1948 and which Israel won in a defensive war in 1967.
U.N. Security Council Resolution 242, passed following the ’67 Six Day War, required withdrawal of Israeli armed forces from some but not necessarily all territories gained in the conflict. The authors of Resolution 242, U.S. Under Secretary of State Eugene Rostow, U.S. Ambassador to the U.N. Arthur Goldberg and British Ambassador Lord Caradon made clear at the time and subsequently that Jews and Arabs had claims in the disputed territories, which included the West Bank (Judea and Samaria). Hence the need for Israeli-Palestinian negotiations.
News media err when, prematurely assuming the results of such negotiations, they mislabel the land as “Palestinian” and Jewish settlers and settlements as illegal when “close Jewish settlement on the land” west of the Jordan River is encouraged by the League of Nations’ Palestine Mandate, Article 6 and perpetuated by the U.N. Charter, Chapter 12, Article 80.