The reference to EDL's supposed support for Israel is gratuitous and completely inappropriate in the context of the article, as the far-right group's position on Israel is not even minimally central to their mission. Nor is it helpful in contextualizing the extremist views of Jo Cox's suspected murderer.

News reports on the shocking murder of Labour MP Jo Cox have centered on the extremist political affiliations of the 52 year-old man arrested for the crime, Thomas Mair of Birstall, West Yorkshire.  For instance, according to the Southern Poverty Law Center, “Mair was a dedicated supporter of the National Alliance (NA), the once premier neo-Nazi organization in the United States, for decades”.

Yet, Mark Townsend, home affairs editor for the Observer (sister site of the Guardian), in an article published on June 18th (Why has the far right made West Yorkshire a home?), somehow managed to tie Israel into the story. 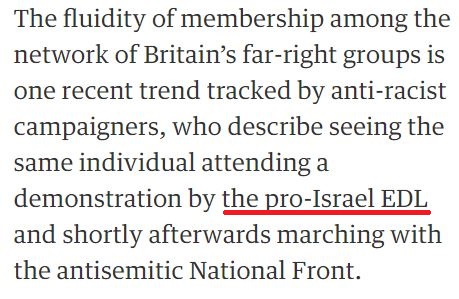 The reference to EDL’s (English Defence League) supposed support for Israel is completely inappropriate in the context of the article, as the far-right group’s alleged position on that particular issue is not even minimally central to their mission. Nor is the information in any way helpful in contextualizing the extremist views of Jo Cox’s suspected murderer.

Community Security Trust (CST), the charity tasked with protecting British Jews, has demonstrated that the claim that “Zionists are somehow in bed with the Muslim haters of the EDL” is nothing but dangerous lie, and that the decision by EDL leaders to, for instance, fly the Israeli flag at some rallies merely represented a cynical (and entirely unsuccessful) effort to attract British Jews to their cause.

British Jews (the overwhelming majority of whom identify with Israel) have, in fact, consistently condemned the group.

Interestingly, as revealed by Israellycool, on the very day Townsend published his article in the Observer on Mair and his association with the “pro-Israel” EDL, disgraced anti-Israel blogger Richard Silverstein touched on the same theme – suggesting, without proof, that the suspected murderer may have had affection for Israel.

Townsend’s innuendo, like Silverstein’s, linking support for Israel with far-right extremism, represents a reprehensible smear and we’ve asked Observer editors to remove the reference from the article.