The BBC continues to fail to provide audiences with the full range of information necessary for understanding of the Airbnb story.

This is a cross-post from BBC Watch

Despite having already published a report on exactly the same story late the previous evening, on the morning of November 20th the BBC News website published an article titled “Airbnb: Israeli uproar as firm bars West Bank settlements“. 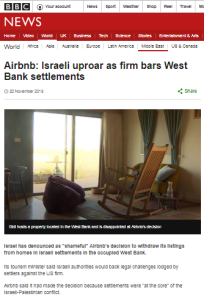 A video embedded into the article also appeared separately on the BBC News website’s Middle East page on November 21st under the title “The West Bank homes being dropped from Airbnb“.

In that filmed report from Gush Etzion – where Jews purchased land long before the Jordanian invasion and occupation in 1948 – viewers were told that:

“Built on land occupied after the 1967 Six Day War, the settlements are seen as illegal under international law.”

In the written report readers were similarly told that:

“Jewish settlements in territory occupied by Israel in the 1967 Middle East war are considered illegal under international law, though Israel disputes this.”

Obviously this story in particular requires full audience understanding of the topic of ‘settlements’ and ‘international law’ but nevertheless the BBC elected once again to ignore its editorial obligation of “due impartiality” by erasing from audience view the existence of legal opinions which contradict the BBC’s selected narrative.

0 replies on “More inadequate BBC reports on the Airbnb story”