As regular readers will be aware, the BBC editorial guidelines on impartiality include a section concerning ‘contributors’ affiliations’ which states:

Obviously one of the basic requirements when introducing a contributor to BBC content is to provide his or her full name, as well as the “affiliations, funding and particular viewpoints” described in that section of the editorial guidelines so that audiences can judge the relevance of the contribution for themselves. 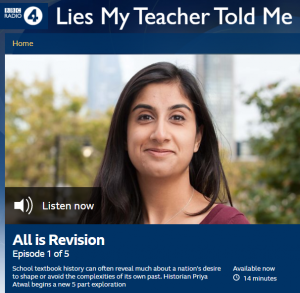 In late January BBC Radio 4 ran a five-part series called “Lies My Teacher Told Me” which will remain available online for a year.

“The school history text book has always been a potential minefield. Every nation setting its histories before its children makes choices. The textbook is frequently used as a primer for the story of the nation when young minds are often unlikely to question or even pay attention to a story that may go on to shape their understanding of their place as citizens so what do we want children to make of their own national past? Should we even teach them a history of the nation? Are facts and dates the stuff of critical understanding? Historian Priya Atwal explores the global issues in telling textbook national history from Lebanon to Japan to Northern Ireland & India as she explores history’s many uses as pedagogy and sometimes propaganda.”

In the first episode listeners heard from a variety of contributors who were introduced using their full name and with details of their professional background or relevance to the topic provided in all cases – except one.

02:14 Atwal: “But it’s never just the epic heft of history that is problematic in the telling of a national story for the classroom. Here’s Aviv [phonetic] remembering the Israeli story he was taught.”

Aviv: “Hardly any discussion; either reading from the book or just talking about what was written in the chapters in the book. The history of the State of Israel is a project and it’s bound up in the project of the creation of the myth of Israel. So the whole Palestinian narrative did not exist. History was a justifier and it was not taught in a way that had multiple sides. It was taught as a truth.” [emphasis in italics in the original]

So who is Aviv? What are his expertise, affiliations and “particular viewpoints”? And – beyond the fact that his statements obviously fit in nicely with Priya Atwal’s agenda – how accurate and representative is his subjective account?

Radio 4 listeners will never know because once again the BBC chose to ignore the very editorial guidelines which are meant to ensure that the corporation provides “impartial news and information to help people understand and engage with the world around them”.

They did, however, hear unquestioned amplification of the notion of “the project of the creation of the myth of Israel”.