BBC News coverage of the Israeli government’s decision to offer a third dose of vaccine against Covid-19 to over-60s has included an audio report by the Jerusalem bureau’s Tom Bateman aired on the BBC World Service radio programme ‘Newshour’ on July 30th (from 30:38 here) and a written report – ‘Coronavirus: Israel to give third jab to people aged over 60’ – which was published on the BBC News website’s ‘Middle East’ page on July 29th. 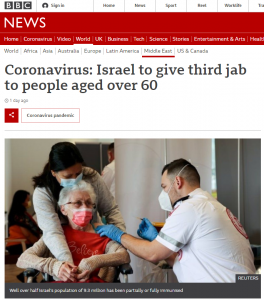 Despite being irrelevant to the written report’s subject matter, embedded into it is a film by the BBC Jerusalem bureau’s Yolande Knell that was first aired in January and which was discussed here:

Much of the information promoted in that filmed report – which appears in the written article without readers being told that it is over six months old – is of course no longer relevant.

As of July 29th, 414,022 people in PA controlled areas and the Gaza Strip are fully vaccinated and 173,371 are partially vaccinated.

In June the Palestinian Authority passed up the opportunity to inoculate at least as many people as are now vaccinated when it refused to accept over a million doses of the Pfizer vaccine from Israel.

One must therefore ask why the BBC continues to promote an undated six-month-old report that was part of a political campaign to which the corporation self-conscripted at the time and which does not provide its audiences with accurate information concerning the current situation on the ground.