Last week on the BBC News website’s ‘Middle East’ page readers found promotion of a statement put out by “almost 50 UN human rights experts” in opposition to an as yet theoretical Israeli plan to apply civilian law to specific parts of Area C.

This week – June 24th – editors of the same webpage chose to highlight a similar statement signed by European parliamentarians in an article headlined “Israel West Bank annexation rejected by European MPs in letter”. 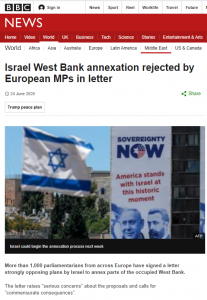 “More than 1,000 parliamentarians from across Europe have signed a letter strongly opposing plans by Israel to annex parts of the occupied West Bank.

The letter raises “serious concerns” about the proposals and calls for “commensurate consequences”.”

Only in paragraph sixteen did readers discover that the initiative did not come from the Europeans themselves.

“The letter was organised by a former speaker of the Israeli parliament, Avraham Burg, along with three other public figures in Israel among those who have traditionally supported the so-called two-state solution of a Palestinian state in the West Bank alongside Israel.”

Readers were told nothing of Burg’s record of radical politics. Neither did they learn the names of the “three other public figures” involved – Michael Ben Yair, Naomi Chazan and Zehava Galon.

The BBC informed readers that “more than 240 signatories are legislators in Britain” and went on to quote extensively from the statement, including the following:.

“It warns that allowing annexation to pass “unchallenged” would encourage other states with territorial claims to “disregard basic principles of international law”.”

The BBC had no comment to make on the irony of British legislators warning about “disregard” in relation to “territorial claims”.

The BBC refrained from reminding readers of Palestinian refusals of past peace plans or of the fact that land swaps have been part of all realistic proposals to date.

The BBC’s report included the much recycled partisan map sourced from the political NGO B’tselem which has been promoted in previous reports on the same topic and which, among other things, portrays the Jewish Quarter of the Old City of Jerusalem as a ‘settlement’.

“Some 430,000 Jews live in over 130 settlements (and scores of smaller “outposts”) built since Israel occupied the West Bank in the 1967 Middle East war.

The settlements are widely considered illegal under international law, though Israel – and the US under the Trump administration – denies this.”

Apparently the BBC’s idea of presentation of ‘balance’ to the political opinions promoted in the bulk of the long article was the inclusion of four sentences and a link towards its end.

“Israel’s ambassador to Washington Ron Dermer wrote on Friday that Israel “plans to extend sovereignty to territories that will remain part of Israel in any realistic peace agreement”.

He said Israel would not include territory the Trump plan designates for a future Palestinian state and would commit not to build settlements in those areas in the coming years.

Israel and the US describe the plan as a “realistic” two-state solution.

Mr Dermer added: “We hope it will convince the Palestinians that another century of rejectionism is a losing strategy and that the Jewish state is here to stay.””

Notably the BBC has to date confined its reporting on public relations statements concerning the topic of potential application of Israeli civilian law to parts of Area C to those which promote one particular political opinion. While letters expressing different views exist, the BBC has not informed its audiences of that fact and neither has it presented them with a balanced, accurate and impartial view of the topic.