BBC coverage of the explosion in Beirut on the afternoon of August 4th has of course seen contributions from the corporation’s Middle East editor. However the ‘analysis’ provided by Jeremy Bowen has included the shoehorning of Israel into the topic, despite both Lebanese and Israeli statements clarifying that it has nothing to do with the disaster.

BBC News channel viewers on August 4th saw a studio interview with Bowen (from 05:28 here) in which he spent more time talking about Israel than about the situation in Lebanon, passing his own judgement on Israel’s statement and introducing a topic which has no connection to the explosion in Beirut. [emphasis in bold added]

Bowen: “And then there’s the regional context as well. The Israelis very quickly said they had nothing to do with this. Normally they might leave that open if they had, so that sounds credible. The issue with them is the trouble down on the border in the south between Hizballah, the Lebanese Shia group – close to Damascus, close to Tehran – and the Israelis. They have been locked in their own escalation in recent weeks. Now this catastroph…catastrophic explosion in Beirut will have consequences nationally and possibly even regionally if it further destabilises Lebanon.”

The following day, August 5th, Bowen gave a long interview (from 03:49 here) on the BBC Radio 5 live Breakfast programme to presenter Nicky Campbell. At 14:09 listeners heard the following: [emphasis in bold added, emphasis in italics in the original] 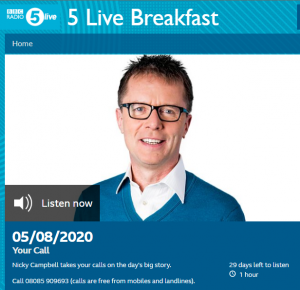 Bowen: “Well, there was already a lot of tension on the border between…ah…Lebanese…ah… Hizballah and the Israelis. Now that’s…it’s a none…it’s an ever present…it’s a very heavily armed border (sic). They had a major war in 2006 which was more or less a draw. Hizballah fought Israel to a standstill which was a hell of a shock for the Israelis who of course have a very modern and powerful armed force and they could not beat Hizballah. Now since then both sides have had a…there’s been a balance of deterrence. But a few weeks ago…ah – the Israelis do a lot of air strikes in Syria – ah…Hizballah people were killed in an Israeli airstrike. Hizballah vowed vengeance. The Israelis claimed they’d thwarted a cross-border attack in the last couple of weeks. Hizballah said no, no; that wasn’t the attack, we’re still gonna take our vengeance. So because of the ramping up of all that and the fact too that the Israeli prime minister is in the depths of his own major political crisis, corruption, Covid 19; lots of stuff going on down there…Some Israelis were saying to me yesterday well, you know, this is…Netanyahu could do with a war. So while there is – let me stress – no evidence that that is what is in anybody’s mind, that is the way that people think when these sorts of things happen in the region. So a situation which is already…these things do not happen…these things…the consequences of this event will not simply be a health and safety investigation. It will be deeply politicised and will be related as well to the geo-political connections in this enormously unstable, difficult and dangerous part of the world.”

Listeners were not told the identity of those anonymous “Israelis” and so could not put Bowen’s pointless promotion of that conspiracy theory into its correct context. Neither – once again – did Bowen bother to inform his audience why Israel carries out airstrikes in Syria and against what targets or what a Hizballah militia member would be doing there.

Apparently the best that the BBC could provide to its funding public when a major catastrophe took place in Lebanon was Jeremy Bowen’s rambling, irrelevant, Israel-related speculations and conspiracy theories.