On June 27th the BBC Arabic website published a translated version of an article by the BBC Jerusalem bureau’s Tom Bateman that had appeared two days earlier in English and which was previously discussed here. 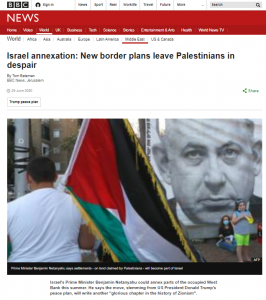 The Arabic version included several statements that were poorly and misleadingly translated from English. CAMERA Arabic submitted a complaint to the BBC but over a month later, has still not received a response.

All translations, emphases and in-bracket remarks are by CAMERA Arabic.

The section reading “But President Trump’s plan potentially awards American recognition to Israel for all the settlements and the strategically vital Jordan Valley – before any negotiations with the Palestinians” is mistranslated in the past tense and without the word “potentially”: “لكن خطة الرئيس ترامب منحت اعترافا أمريكيا لإسرائيل بجميع المستوطنات ووادي الأردن الحيوي الاستراتيجي “قبل أي مفاوضات مع الفلسطينيين, i.e. “But President Trump’s plan has awarded American recognition to Israel for all the settlements” etc. The Trump plan, being a plan, has so far not “awarded” to Israel anything.

On August 28th the BBC made corrections to the article following a complaint from CAMERA Arabic.