Ahmad Fakhouri is one of the two main presenters of BBC Arabic’s “Trending” programme, along with Rania al-Attar. On December 11th he released a video on his private YouTube channel, entitled “On AbouTrika – and BBC neutrality”, in which he discussed the programme’s editorial policy in relation to the broadcast of social media comments.

Mohamed AbouTrika is a retired Egyptian footballer whose homophobic remarks on live television last November sparked controversy across the Arab world and in the United Kingdom.

Fakhouri’s statements about being bound by his employer’s editorial guidelines, regardless of his personal views, need to be put into context. Until a few months ago, he and al-Attar regularly presented the exact same kind of comments that he now claims are unacceptable in BBC content. 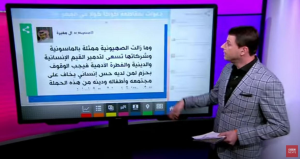 Fakhouri reads out a comment claiming that Zionism, “represented by freemasonry”, engages in “a diabolical campaign to spread perversion [i.e. homosexuality]” across society, aiming to “destroy the values of humanity and religion, as well as human nature”, August 2019

Fakhouri reads out a comment arguing that an LGBT couple should be incarcerated for life, January 2020 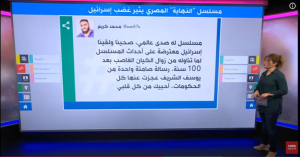 Al-Attar reads out a comment “saluting” a television series favourably depicting the near destruction of Israel (“the usurper entity”) and the mass expulsion of its Jewish population by means of war, April 2020 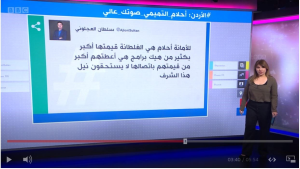 Al-Attar reads out a comment supporting terrorist Ahlam Tamimi, portraying her as a woman “of great value” and “honour”, October 2020 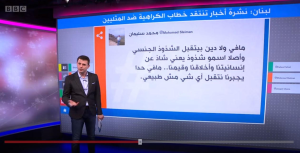 Fakhouri reads out a comment saying that homosexuality is “perversion” because it “perverts our humanity, morals and values”, June 2021

It was CAMERA Arabic which first flagged this phenomenon, documenting cases in which the BBC Arabic version of ‘Trending’ uncritically amplified homophobic and antisemitic social media content between mid-2019 and mid-2021.

Two British newspapers – The Daily Mail and The Jewish Chronicle –  picked up that story and sought BBC responses (in July and September 2021 respectively). While the homophobic content was carefully removed from BBC platforms following the Daily Mail article, no such action was taken regarding the hostile comments towards Jews and Israelis that CAMERA Arabic helped the Jewish Chronicle reveal and the BBC did not issue an apology.

At the time, a BBC spokesperson put out a general statement saying that the corporation sees nothing wrong with editing problematic comments (be they homophobic, antisemitic or otherwise hateful) to make them appear more acceptable on screen, implying it also intended to do so in the future.

The BBC’s double standards when addressing antisemitism and homophobia and its approach to manipulating comments in order to meet editorial standards were discussed in detail by a CAMERA Arabic staff member in a JC op-ed last October.

To conclude, despite citing the BBC’s long-standing editorial guidelines, Fakhouri’s video falls short of acknowledging that his programme did not abide by them until recently and that the change came only after outside observers alerted the BBC to the nature of that Arabic language content. The video also raises questions regarding the standards employed by BBC Arabic’s ‘Trending’ programme. Rather than examining what Arabic-language social media actually promotes, ‘Trending’ has switched from normalising hatred to concealing it altogether (“with all due respect to the tendencies of the Arab public”, to quote the presenter). Meanwhile, the habit of manipulating comments – which was not mentioned in Fakhouri’s video at all – is apparently still at the editors’ disposal.