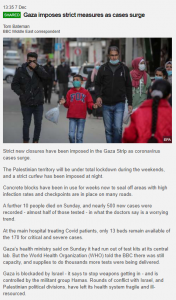 The final paragraph of that report states: [emphasis added]

“Gaza is blockaded by Israel – it says to stop weapons getting in – and is controlled by the militant group Hamas. Rounds of conflict with Israel, and Palestinian political divisions, have left its health system fragile and ill-resourced.”

Instead of providing readers with a proper explanation of the years of Islamist terrorism against Israeli civilians that make the blockade necessary, Bateman resorts to the BBC’s standard ‘Israel says’ formula while using the euphemistic term “militant” to describe an internationally designated terrorist organisation.

He likewise fails to adequately inform audiences that the reason those euphemistically portrayed “Palestinian political divisions” – i.e. the Hamas-Fatah split – have resulted in a chronic shortage of medical supplies is because the Palestinian Authority has used that and other methods to put pressure on Hamas.

Yolande Knell: “…and because of the internal Palestinian political divisions, this has also led in the past to problems getting the drugs that are needed into Gaza and equipment for the hospitals.”

“Gaza is subject to a longstanding land, sea and air blockade by Israel and Egypt that has devastated its economy and, along with disputes between its Islamist Hamas rulers and rival West Bank-based Palestinian Authority, impaired its public health system.” [emphasis added]

“That highlighted section was added to the report some three hours after its initial publication but once again BBC audiences are not given a proper explanation as to why those “disputes” have resulted in a chronic shortage of medical supplies. Neither are they informed that the restrictions imposed by Israel on the entry of goods and materials to the Gaza Strip are confined to dual-use items – i.e. those which can be used for the purpose of terrorism – and do not include medicines.”

After years of misleading BBC portrayal of chronic shortages afflicting the healthcare system in the Gaza Strip as predominantly attributable to Israeli counter-terrorism measures, it would appear that finally some sort of editorial decision has been taken to acknowledge the real reasons for the shortage of medicines in the Gaza Strip’s hospitals.

Nevertheless, until the BBC provides its audiences with a full account of the way in which for years the power struggle between Fatah and Hamas has had detrimental effects on services including power, sewage, water and healthcare in the Gaza Strip, that perfunctory ticking of the impartiality box with an opaque reference to “Palestinian political divisions” is meaningless.