The Israel Security Agency’s report on terror attacks (Hebrew) during December 2020 shows that throughout the month a total of 98 incidents took place: 56 in Judea & Samaria, 38 in Jerusalem and inside the ‘green line’ and four in the Gaza Strip sector.

In Judea & Samaria and Jerusalem the agency recorded 84 attacks with petrol bombs, five attacks using pipe bombs, two arson attacks, two shooting attacks and one additional attack. In the Gaza Strip sector one attack with a petrol bomb and three incidents of rocket attacks were recorded.

One civilian was murdered and one member of the security forces was injured in a petrol bomb attack in Issawiya during December.

Visitors to the BBC News website saw no reporting whatsoever on the topic of Palestinian terrorism throughout December. The murder of Esther Horgen near Tal Menashe on December 20th was not covered at all and neither was a shooting incident in Jerusalem’s Old City the following day. Rocket attacks launched from the Gaza Strip on December 25th were likewise ignored.

Throughout 2020 the BBC News website reported just 4.23% of the terror attacks which actually took place and most of that was in one month in which a high number of rocket attacks took place. In eight of the year’s twelve months, no reporting on terrorism was produced at all and only 33.3% of the fatalities resulting from terror attacks received BBC coverage. 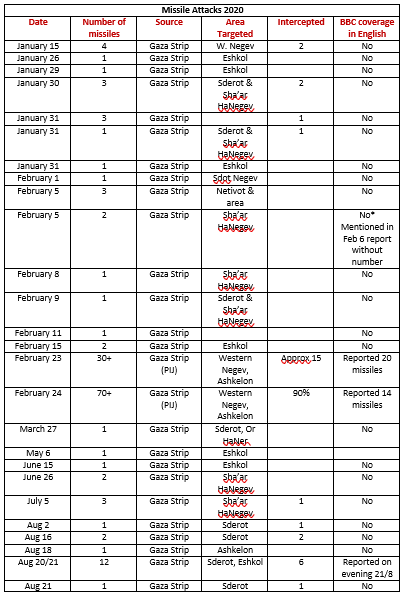 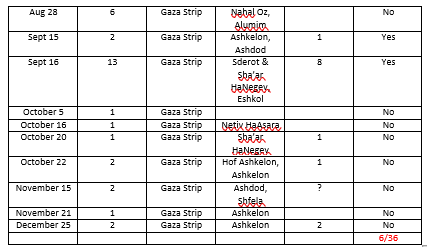 Does not include shortfalls

In the six years between January 2015 and December 2020 (see ‘related articles’ below), BBC News website coverage of the 12,530 terror attacks against Israelis stood at 15.6% with 84% of the resulting fatalities reported.