The Guardian continued its assault on the legitimacy of the International Holocaust Rememberance Association’s Working Definition of Antisemitism today by publishing a letter full of distortions about the definition.

The IHRA definition, we should note, has been adopted or endorsed by 30 (democratic) countries, the EU Council, EU Parliament, EU Commission, EU Council, the UN Secretary General, the UN Special Rapporteur for freedom of religion or belief, the EU Commission against Racism and Intolerance and the Organization of American States – as well as many regional and local governments.

Here’s the Guardian letter “Antisemitism definition is undermining free speech”, signed by a few retired judges and lawyers, in full:

The legally entrenched right to free expression is being undermined by an internally incoherent “non-legally binding working definition” of antisemitism. Its promotion by public bodies is leading to the curtailment of debate. Universities and others who reject the instruction of the secretary of state for education, Gavin Williamson, to adopt it should be supported in so doing.

The Universal Declaration of Human Rights declares that “everyone has the right to freedom of expression; this right includes freedom to hold opinions without interference and to seek, receive and impart information and ideas through any media and regardless of frontiers”. The right is embodied in UK law by the Human Rights Act 1998, section 6 of which expressly prohibits a public authority from acting in a way that is incompatible with that right. Specific protections for freedom of expression at universities were also enacted in the Education Act 1986.

Mr Williamson was legally and morally wrong last October to instruct English universities to adopt and implement the International Holocaust Remembrance Alliance (IHRA) definition of antisemitism. He has threatened to punish them with loss of income if they fail to comply. This would be an improper interference with their autonomy.

The definition is often described as “the international definition of antisemitism”, but it has no legislative or other authority in international or domestic law. Noted scholars of antisemitism, including Prof David Feldman, director of the Pears Institute for the Study of Antisemitism at Birkbeck, University of London (2 December), have criticised its shortcomings.

The IHRA added to the definition illustrative examples of statements that could be antisemitic “taking into account the overall context”. The majority of these examples do not refer to Jews as such, but to Israel. They have been widely used to suppress or avoid criticism of the state of Israel.

The impact on public discourse both inside and outside universities has already been significant. Mr Williamson’s threat should be withdrawn.

As Dave Rich, CST’s Director of Policy, pointed out on Twitter, their claim that “The majority of [IHRA’s] examples [of antisemitism] do not refer to Jews as such, but to Israel” is a lie.

Nine of the eleven examples refer to Jews. 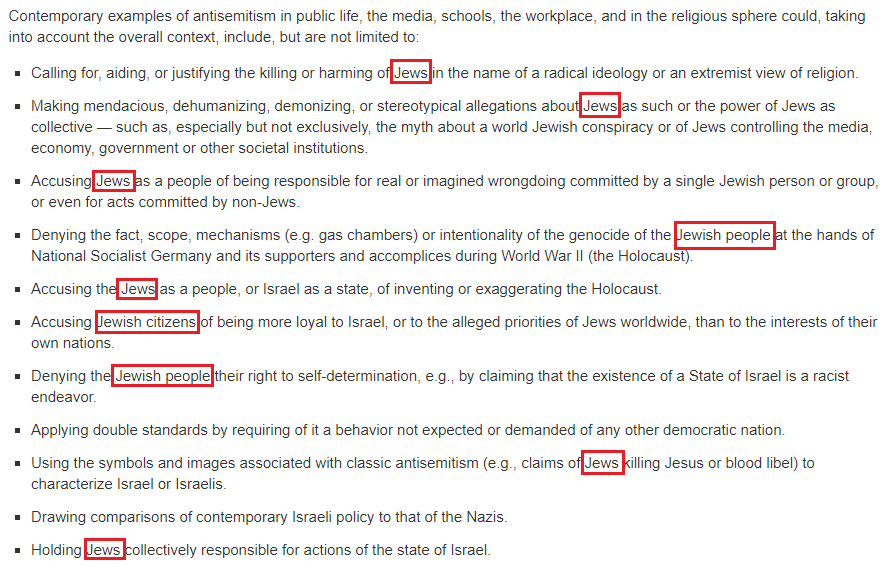 Additionally, the letter misleads in these sentences:

The right [to free speech] is embodied in UK law by the Human Rights Act 1998, section 6 of which expressly prohibits a public authority from acting in a way that is incompatible with that right. Specific protections for freedom of expression at universities were also enacted in the Education Act 1986.

First, as even the writers acknowledge, the definition is non-legal and therefore cannot supersede a country’s legal protections.

Moreover, the letter fails to acknowledge that, in the UK, there are a host of hate speech laws already on the book, demonstrating that the right to free speech is not absolute.

Section 4 of the Public Order Act 1986 (POA)…makes it an offence for a person to use “threatening, abusive or insulting words or behaviour that causes, or is likely to cause, another person harassment, alarm or distress”. This law has been revised over the years to include language that is deemed to incite “racial and religious hatred”, as well as “hatred on the grounds of sexual orientation” and language that “encourages terrorism”.

The final piece of misinformation conveyed in the letter – and arguably the most pernicious – is the claim that IHRA has “been widely used to suppress or avoid criticism of the state of Israel”.

This accusation, straight out of the Corbynista playbook, is belied by the disproportionate critical scrutiny – and, often, outright demonisation – of Israel in the media, in Parliament and on university campuses – as well as on the streets of London, where anti-Israel demos are often attended by thousands of protesters.  As we’ve often noted, if Israel or its Jewish supporters in the UK are trying to suppress criticism of Israel, they’re failing miserably at the task.

Finally, the IHRA definition clearly states that “criticism of Israel similar to that leveled against any other country cannot be regarded as antisemitic”, which is extremely important context that the letter omits.

To paraphrase Benny Morris, if this letter was an actual person, we’d have to say that he didn’t have an honest bone in his body.