Previously we discussed the written and audio reports produced by the BBC Jerusalem bureau’s Tom Bateman concerning the start on March 8th of an Israeli initiative to vaccinate Palestinians working legally in Israel: 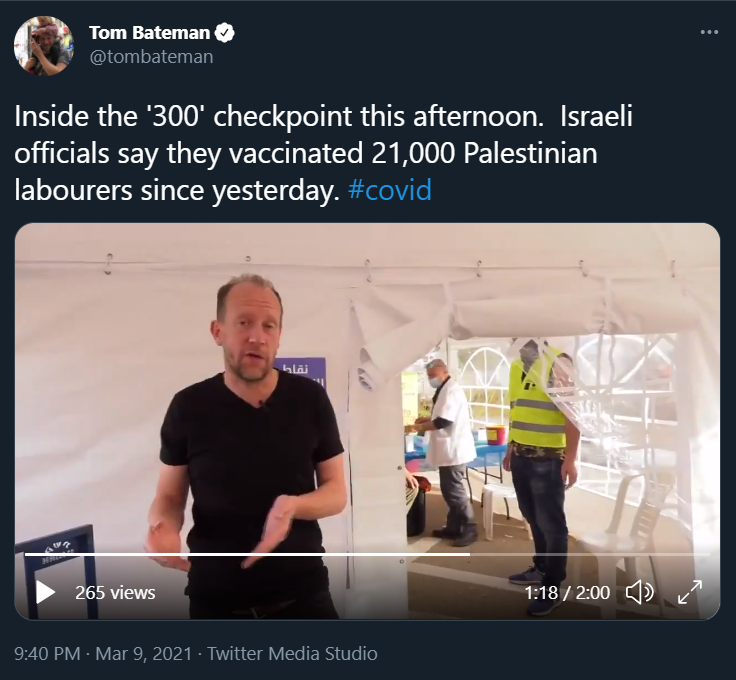 At the beginning of that two-minute filmed item viewers see Palestinian workers receiving vaccines at a checkpoint between Jerusalem and Bethlehem. Nearly half of Bateman’s report however is devoted to yet more uncritical amplification of a political campaign initiated by political NGOs just two days after Israel began vaccinating its own citizens.

Bateman [from 1:10]: “But all of this is controversial. These kinds of scenes have been very much the focus of some human rights groups. They say it shouldn’t just be those Palestinians who have work permits bringing them into contact with Israelis that get the vaccine but it should be all the Palestinians – up to 5 million or so in the occupied West Bank and Gaza Strip. And those groups say that Israel as the occupying power has a moral and legal responsibility. As for Israel, it completely rejects that. It says that it believes under previous peace accords with the Palestinians that that full job falls to the Palestinian Authority. And it [the PA] has been trying to procure vaccines but so far they’ve only had about 12 thousand or so – some from Israel, some that they got themselves internationally. But it has been in terms of that roll-out painfully slow and millions of Palestinians are still waiting for their vaccines.” [emphasis in italics in the original, emphasis in bold added]

As has overwhelmingly been the case since the BBC began promoting the political campaign in early January, Bateman afforded its organisers the halo of “human rights groups” while failing to make any attempt to clarify to audiences that they include political NGOs (in some cases foreign funded) with a record of lawfare campaigns against Israel such as B’tselem, Amnesty International Israel, Gisha, Lawyers for Palestinian Human Rights, Adalah, Al Mezan and the PCHR – the latter two of which are known to have links to the PFLP terrorist organisation.

Once again – despite the BBC’s February 9th clarification concerning PA responsibility for Palestinian healthcare – Bateman presented Article 17 of the 1995 Oslo Accords as something that Israel “says it believes” is the case. And as in his previous day’s reporting, Bateman avoided the issue of domestic criticism of the PA’s priorities in vaccine distribution, which have included sending 200 doses to Jordan.

It is abundantly clear that the story of Israel’s roll-out of vaccinations for Palestinian workers who are not Israeli citizens is of secondary priority in Tom Bateman’s reporting. The BBC Jerusalem bureau correspondent’s reporting has not evolved since January 3rd except for the fact that whereas then it was ‘controversial’ that Israel was not vaccinating Palestinians (apart from hospital workers and those resident in Jerusalem), now it is ‘controversial’ that Israel is vaccinating tens of thousands of people whose healthcare is actually the responsibility of the Palestinian Authority.

For over two months Bateman – like his colleagues – has unquestioningly amplified the PR messaging of political NGO’s he largely failed to identify without once explaining their agendas to BBC audiences. For over two months he has presented Article 17 of the Oslo Accords as something that ‘Israel says’ or ‘Israel believes’ is the case without once providing a proper factual explanation of Israel’s legal obligations.

And for over two months that self-conscripted activism has been passed off to BBC audiences as ‘journalism’.