BBC Radio 4’s coverage of the April 11th incident at the Natanz nuclear facility in Iran included an item (from 21:31 here) aired on the April 12th edition of ‘PM’ which was introduced by presenter Evan Davis as follows: [emphasis in italics in the original, emphasis in bold added] 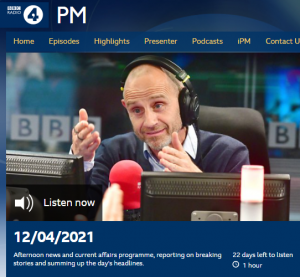 Davis: “Just as the US and Iran start exploring the possibility of coming back to a deal on Iran’s nuclear programme and US sanctions, just as they’re getting talks described as constructive, there was a sudden explosion at an Iranian nuclear facility yesterday, wiping out its electric power and thus setting Iran’s enrichment programme back. It looked deliberate. Fingers quickly pointed at Israel as probably behind it, including in Iran and in Israel. While making no comment on that accusation, Israel’s prime minister Benjamin Netanyahu has reiterated that Israel will not allow Iran to develop nuclear weapons.”

Following a recording of Netanyahu making a statement to that effect, Davis introduced his sole interviewee.

Davis: “Shashank Joshi is defence editor at the Economist. Well, Shashank, tell us what you think is going on here and what effect it has, if you like, on the possibility of America and Iran coming to some kind of accord.”

Joshi: “Well Natanz is a facility where Iran enriches uranium which is the idea that you purify it for use either in reactors or, at particular levels of enrichment, for a possible bomb. And Israel – or Israel’s intelligence service, the Mossad – has struck Natanz on several occasions. There was a major cyber attack launched by the US and Israel called Stuxnet over a decade ago on Natanz. There was an explosion at Natanz last summer, from which it was only just recovering and now there is the latest attack on the power supply of Natanz.”

Of course there has never been any official confirmation of the claim that the US and Israel were behind Stuxnet and likewise it has not been established that Israel was responsible for the July 2020 incident at Natanz, which the BBC itself reported had been claimed by an Iranian dissident group. Evan Davis however made no effort to qualify those claims from Joshi, who continued:

Joshi: “And I think given the timing – you’ve alluded to the diplomacy around Iran’s nuclear programme in which a group of states including the European Union, China and Russia are talking to Iran and indirectly therefore channeling those views to the United States to get America back into the deal that Donald Trump left in 2018 – I think it’s looking fairly likely that the intent of Israel’s action was to try and derail that process, not only to buy time to slow down Iran’s nuclear programme which is intended as leverage against America but also I think to disrupt any effort to get the US and Iran back into the same room and back signed up to the same deal.”

The fact that Joshi has not only concluded who is responsible for the recent incident at Natanz but what the underlying motivations were without any concrete evidence whatsoever obviously did not particularly disturb Davis.

Joshi: “It’s astonishingly bold and I think it speaks to the fact that Mossad has shown just astonishing freedom of manoeuvre inside Iran. You know, look, ahm two years ago [sic – actually in 2018] they stole an entire archive of Iran’s nuclear materials from a warehouse in Tehran and whisked it away to Israel. Last year they conducted a string of attacks on missile sites, nuclear sites, chemical sites and assassinated not just a senior Al Qaeda figure in Iran…in…in Iran, on Iranian soil but also of course as many of us remember, Mohsen Fakhrizadeh the father of Iran’s nuclear programme in December. So I think Israel is just showing it can act in Iran with absolute impunity and of course at the same time there is also a naval campaign underway in which Israel and Iran are attacking each other’s ships in the Red Sea.”

Once again Davis made no effort to clarify to listeners that some of Joshi’s unreserved claims concerning assorted alleged Israeli actions in Iran are actually unconfirmed speculations and that what his interviewee described as “a string of attacks” in summer 2020 has been questioned by researchers.

Davis: “Mmm, right. Now if somebody is thinking let us just make sure that there isn’t too much peace and harmony between the West or between the big powers and Iran and this might help that, will it work if you think of it as a device to kind of slightly sabotage the talks as much as the nuclear programme?”

Joshi: “I think it’s unlikely. I think the aim is probably to goad Iran into a kind of over-reaction that then prompts Joe Biden to walk away from talks. I don’t think it will work. You know, we had a few months in which Joe Biden and Iran were saying no you first, you first to go back into the deal. That seems to have been eased on the weekend when the two sides effectively met in Vienna indirectly and I think the Iranians are desperate for sanctions. There is a slight political aspect to this which is they have elections – presidential elections – in the summer and the political atmosphere is really quite tense in Iran. But I think the Americans want to get back in, the Iranians want to get back in and although, you know, they’re pleased perhaps that the Iranian nuclear programme is slowed down, ultimately there’s too much at stake and Iran will probably hold back from any sort of major retaliation in the same way that they’ve held back for all of the incidents that we saw against Natanz and other facilities last year.”

Yet again Davis made no effort to inform listeners that Israeli involvement in those “incidents” is unconfirmed before closing the item.

Davis: “Mmm. Shashank, Shashank Joshi, defence editor of the Economist; thank you for that.”

Interestingly, Davis did not inform listeners that in addition to his post at the Economist, Joshi is also a member of the advisory board at the RUSI think-tank. The day after this interview was aired, the BBC’s Frank Gardner quoted an analyst at the same organisation as saying that “recent Israeli actions are a deliberate attempt to sabotage the nuclear negotiations”.

As we see, the narrative that the BBC has chosen to promote is that Israel carried out an attack on Natanz with the intention of disrupting a possible US return to the JCPOA agreement. The fact that that chosen narrative is currently based entirely on supposition, speculation and interpretations of second-hand statements from anonymous sources is remarkably untroubling to a media organisation which claims to be a trusted source of news and to “avoid unfounded speculation”.