Readers may recall that in February of this year the BBC launched a public consultation concerning proposed amendments to two parts of its complaints procedure: editorial complaints and general complaints.

Following that consultation further changes were made to the proposed amendments and after approval by the BBC Board, the revised Complaints Framework was published – effective immediately – on June 8th.

The new Complaints Framework can be found here.

The submissions made by organisations contributing to the consultation – including CAMERA UK (then BBC Watch) – can be found here.

The BBC’s responses to points raised by the contributing organisations are available here.

One significant change is the extension of the time frame for complaints concerning items appearing on BBC iPlayer and BBC Sounds. That time frame has now been extended up to 30 working days after the item has been removed from the platform.

“…if you make a complaint about content currently published on a BBC website you should make it within 30 working days of the date when it first appeared online.”

Another significant change concerns the ability of the Editorial Complaints Unit to consider points raised at the earlier stages of the complaints process.

“The BBC proposed that the ECU should be given the power to assess whether a complaint has been adequately answered at Stage 1a and Stage 1b in respect of editorial matters. Where, in its judgement, there are parts of the complaint that have not been adequately dealt with, the ECU should ensure that these form part of its investigation and finding. […]

The BBC Board has approved the proposed change to allow the ECU to assess whether a complaint has been adequately answered at Stage 1a and 1b.”

One point which was not adopted was the proposal to scale back the publication of ECU findings. 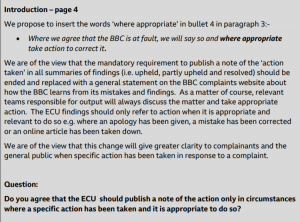 The BBC notes that:

“Four respondents – the Voice of the Listener and Viewer, BBC Watch and two other respondents did not agree with the proposal. There were concerns that the use of the word ‘appropriate’ was too subjective. It was suggested that this could lead to less transparency and harm public confidence. BBC Watch disagreed with the proposal stating that complainants should be informed directly of actions taken relating to their complaint. They also stated that a general statement on the BBC’s website about how ‘the BBC as an organisation learns from its mistakes and findings’ was insufficient, arguing that it would provide less detail on actions taken in relation to specific complaints.”

“…we have taken note of the comments raised in response and as a consequence we will continue to publish action points for all upheld, partly upheld and resolved findings, as requested by VLV and others.”

In relation to additional topics:

“BBC Watch, the NFBUK and one other respondent commented on the third-party handling of the BBC’s complaints procedure at stages 1a and 1b. All were critical of the handling of complaints and the quality of responses given at these stages. The BBC’s use of template responses was raised by BBC Watch which they felt could fail to address points made by individual complainants. They also commented that response times to complaints had deteriorated at stages 1a and 1b, citing that in the past 12 months these stages have failed to meet required standards.

Generic responses to large numbers of complaints made on the same issue was introduced by an earlier review of the complaints framework to speed up response times. The BBC believes that this continues to be the most effective way of handling such complaints. Complainants who receive this type of response are notified that their complaint has been dealt with in this manner and why.

Response times have suffered in recent months after a spike in complaints. As required by Ofcom, the BBC publishes fortnightly totals of received complaints on its website. These figures make clear the unprecedented number of complaints received, particularly during the 2019 General Election period which are being addressed. More complaints were submitted to the BBC in the 6 months up to April 2020 than during the entire previous year 2018-19, which affected service performance. Response times are now returning to more normal levels.”

HAVE YOUR SAY: BBC LAUNCHES CONSULTATION ON COMPLAINTS PROCEDURES

HOW TO COMPLAIN TO THE BBC