Back in August 2014 former Associated Press journalist Matti Friedman wrote this about the relationship between the media and Hamas in the Gaza Strip:

“An observer might think Hamas’ decision in recent years to construct a military infrastructure beneath Gaza’s civilian infrastructure would be deemed newsworthy, if only because of what it meant about the way the next conflict would be fought and the cost to innocent people. But that is not the case. The Hamas emplacements were not important in themselves, and were therefore ignored. What was important was the Israeli decision to attack them.

There has been much discussion recently of Hamas attempts to intimidate reporters. Any veteran of the press corps here knows the intimidation is real, and I saw it in action myself as an editor on the AP news desk. During the 2008-2009 Gaza fighting I personally erased a key detail—that Hamas fighters were dressed as civilians and being counted as civilians in the death toll—because of a threat to our reporter in Gaza.”

In November of the same year he wrote:

“In previous rounds of Gaza fighting, Hamas learned that international coverage from the territory could be molded to its needs, a lesson it would implement in this summer’s war. Most of the press work in Gaza is done by local fixers, translators, and reporters, people who would understandably not dare cross Hamas, making it only rarely necessary for the group to threaten a Westerner. The organization’s armed forces could be made to disappear. The press could be trusted to play its role in the Hamas script, instead of reporting that there was such a script. Hamas strategy did not exist, according to Hamas—or, as reporters would say, was “not the story.” […]

Hamas understood that journalists would not only accept as fact the Hamas-reported civilian death toll—relayed through the UN or through something called the “Gaza Health Ministry,” an office controlled by Hamas—but would make those numbers the center of coverage. Hamas understood that reporters could be intimidated when necessary and that they would not report the intimidation; Western news organizations tend to see no ethical imperative to inform readers of the restrictions shaping their coverage in repressive states or other dangerous areas.”

During Operation Pillar of Cloud in November 2012, the IDF targeted a building housing two Hamas media outlets, ‘Al Quds TV’ and ‘Al Aqsa TV’. At the time we observed:

“What is surprising, however, is the apparent willingness of media outlets such as ITN, Sky and Al Arabiya to share premises with – and act as human shields for – the abhorrently racist propaganda arm of a terrorist organization. […]

Not quite so surprising – but disappointing all the same – is the rush to condemn a strike on the infrastructure of the Hamas propaganda and communications arm as “targeting journalists”. Leading the charge is Paul Danahar – head of both the BBC’s Jerusalem Bureau and the Foreign Press Association in Israel, which – without waiting for clarification from the IDF – has already issued a statement on the subject.”

On May 15th 2021 another Gaza City building once again housing both foreign media outlets and Hamas assets was targeted after warning was given to its occupants. BBC reporting on that incident included a filmed report titled “Gaza tower containing media offices collapses after Israeli strike”. 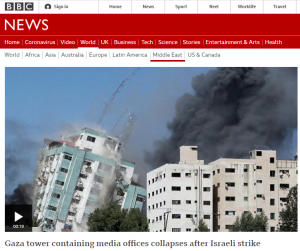 “A tower block in Gaza, housing the offices of the Associated Press and Al Jazeera news outlets, has collapsed after being hit by an Israeli strike.

The building had been evacuated beforehand after the owner received a warning by Israel in advance of the attack, Reuters news agency says.

Coverage of the incident was also seen in the latter part of a report aired on the BBC World News TV station on May 15th.

In the May 16th edition of the BBC News website’s ‘live’ page audiences found the following: 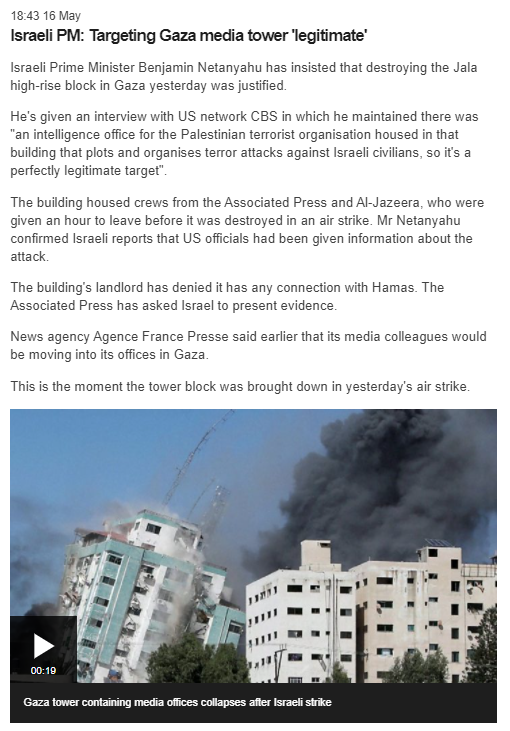 “On Saturday afternoon, an Israeli air strike destroyed a high-rise building housing media organisations, including The Associated Press and Al-Jazeera, plus a number of offices and apartments. 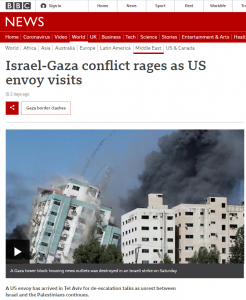 In a statement released shortly afterwards, the Israeli military said the building housed military assets belonging to Hamas, the Palestinian militant group that rules Gaza. The building’s landlord has denied this.

The Associated Press (AP) said the block was hit roughly an hour after Israeli forces ordered people to evacuate.

The news organisation’s CEO, Gary Pruitt, said: “This is an incredibly disturbing development. We narrowly avoided a terrible loss of life. A dozen AP journalists and freelancers were inside the building and thankfully we were able to evacuate them in time.””

“Benjamin Netanyahu has insisted that destroying the Jala high-rise block in Gaza on Saturday was justified.

The Israeli prime minister told CBS Face the Nation that the building was used by a “Palestinian terrorist organisation”, and all attempts to minimise civilian injuries had been made.”

However, some of the BBC’s coverage of that story has been more problematic.

The topic was raised in an interview with Israeli MK Naftali Bennett on the BBC World News Channel on May 16th. Presenter Karin Giannone posed the following questions (from 03:55, emphasis in italics in the original):

“Have you…what are your thoughts, can I ask, about the demolition of a building that housed the Associated Press and Al Jazeera in Gaza yesterday and what evidence is there, do you believe, that the building housed Hamas militants?”

“Sorry but I’m afraid we’ve spoken to the head of the Associated Press. He had absolutely no idea that Hamas was allegedly in that building and he cannot verify what Israel is saying that there were militants operating. They’ve been in that building for fifteen years. Don’t you think they would have liked to know if that was true?”

“I mean you say that the Associated Press – one of the most esteemed news organisations in the world; it’s an American organisation – and you’re saying that they shouldn’t [sic] have known that there were Hamas militants in that building. I mean will you give them the evidence? Will Israel produce the evidence?”

Giannone’s presentation clearly encouraged viewers to take the AP statements completely at face value and she even suggested that Israel is at fault for not informing AP that they were sharing premises with terrorist organisations. Moreover, she then went on to amplify completely unevidenced claims:

“So you don’t…you don’t believe that Israel is trying to…ah…silence or at least put some sort of controls on reporting of what’s going on in Gaza by knocking out two of these very esteemed news organisations? […] A lot of people are accusing Israel of that.”

“A lot of people” include Al Jazeera, Ken Roth of ‘Human Rights Watch’ and Joel Simon of the Committee to Protect Journalists.

Karin Giannone was however not the only BBC employee to provide wind to the sails of that unevidenced canard. Listeners to BBC Radio 4’s ‘PM” programme on May 15th heard the following from an Al Jazeera Arabic employee (without any context concerning that Qatari news organisation provided) in a news bulletin (from 02:33 here):

Newsreader: “An Al Jazeera correspondent in Doha, Jamal Elshayyal, condemned what he called a fragrant breach of international law.”

Elshayyal: “This is a very clear, brazen attempt to silence journalists from reporting what is happening on the ground in the besieged Gaza Strip. This is a building that has Associated Press – a US owned news agency – one of the world’s most renowned news agencies in the world. Do you really think that the Associated Press would be in a building that had Hamas commanders in it?”

Newsreader: “The US Associated Press which was based there said it was shocked and horrified while the Qatar-based broadcaster Al Jazeera accused Israel of trying to silence journalists.”

The May 15th evening edition of the BBC World Service programme ‘Newshour’ opened with an item dubbed “Israel destroys Gaza tower housing foreign media” (from 00:09 here) in which listeners were repeatedly told by AP’s head Gary Pruitt that his agency’s reporting from the Gaza Strip has been “impaired” and: 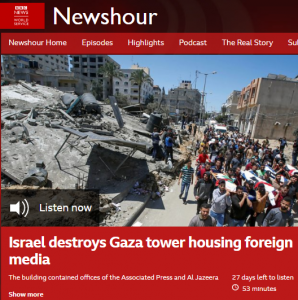 Pruitt: “…the impact will be to reduce what the world knows about the events in Gaza.”

Coomarasmay: “Are you concerned that this was in actual fact an attack on the media?”

Pruitt: “Well we don’t know […] but I can tell you that the impact is that it will be harder to tell the story of Gaza as a result of that.”

As we see, nothing has changed in the nine years since Paul Danahar and his colleagues (along with Hamas) promoted the false notion that a strike on terrorist assets in the Gaza Strip was actually an attack on the media.

The BBC has had fourteen years in which to investigate Hamas’ placement of military infrastructure in civilian buildings and neighbourhoods and yet it has made no serious effort to inform its worldwide audiences on that topic and indeed BBC staff have on occasion tried to obscure it.

Instead, the corporation continues to focus cross-platform audience attentions on mythology invented by journalists having difficulty explaining why they too have bended to comply with Hamas’ script.