A Guardian article (‘I refuse to visit his grave’: the trauma of mothers caught in Israel-Gaza conflict”, June 30) focusing on the suffering of a Palestinian mother who lost her young child in the recent conflict doesn’t explicitly blame Israel for the boy’s death.

But, that would likely be the take-away for the casual reader. 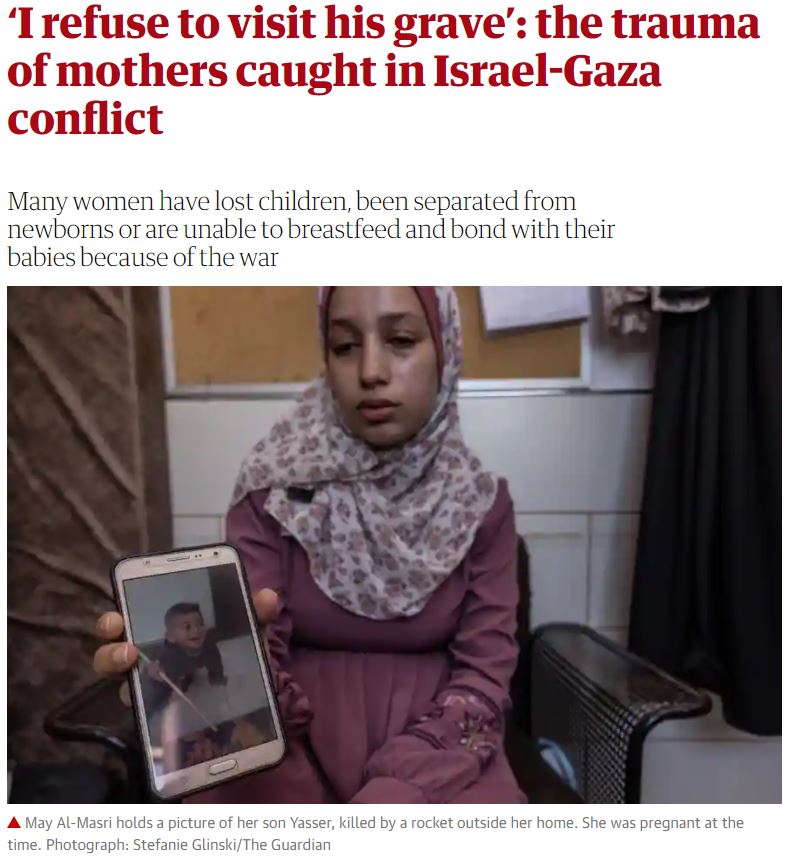 Here are the opening paragraphs of the piece, written by Stefanie Glinski:

In the last month of her pregnancy, May al-Masri was preparing dinner when a rocket landed outside her home in northern Gaza, killing her one-year-old son, Yasser.

Masri had felt the explosion’s shockwave when the attack happened last month, but was largely unharmed. Running outside once the air had cleared, she found her husband severely wounded and her child’s body covered in blood.

With her husband in a West Bank hospital – and likely to be there for months to come – Masri gave birth to a healthy boy a few weeks later. However, the trauma of the attack, and the grief of her loss, have made it difficult for the 20-year-old to bond with or breastfeed her newborn baby.

May’s escalation of violence in the long-running Israel-Palestine conflict killed 256 Palestinians and 13 Israelis. Yasser was one of the 68 children killed in Gaza, according to the authorities there.

Though the word “rocket”, instead of bomb or airstrike, would indicate to the careful reader that the child’s tragic death was likely caused by a misfired projectile by a Gaza terrorist group, and not the IDF, it’s telling that the Guardian writer doesn’t inform readers anywhere in the article that this is the case.

In fact, in researching the boy in question, it seems almost certain that, though the journalist got some details wrong (His name is usually reported as Yazan al-Masri, and he was 2, not 1) al-Masri, as noted on these pages, and by Israeli and Palestinian NGOs, was indeed killed by a rocket fired by a terrorist group in Gaza.

Moreover, though a signifacnt percentage of the 4,360 rockets fired by terrorists in the Gaza Strip between May 10th and May 21st fell inside Gaza, there’s been almost no coverage of that topic at the Guardian or other British media outlets.

Finally, it’s worth noting that the article was published on the Guardian’s ‘Global Development‘ page, funded by the Bill and Melinda Gates Foundation. 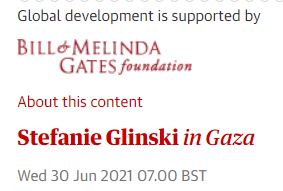 However, by obfuscating Hamas’s responsibility for the death of al-Masri and other Palestinian children during the war, consistent with the media outlet’s broader failure to hold the extremist group responsible for their prioritisation of destroying Israel over the basic needs of Palestinians, the primary cause of the territory’s under development will continue to elude readers.