In July the BBC published a report about an Algerian judoka who was sent home after refusing to compete against an Israeli at the Olympic Games on its BBC Sport website and on the ‘Middle East’ page of the BBC News website.

On July 24th the International Judo Federation announced the suspension of Fethi Nourine and his coach Amar Benikhlef.

“According to the IJF rules, in line with the Olympic Charter and especially with rule 50.2 that provides for the protection of the neutrality of sport at the Olympic Games and the neutrality of the Games themselves, which states that “no kind of demonstration or political, religious or racial propaganda is permitted in any Olympic sites, venues or other areas,” Fethi Nourine and Amar Benikhlef are now suspended and will face a decision by the IJF Disciplinary Commission, as well as disciplinary sanctions by the National Olympic Committee of Algeria back in their country.”

According to reports, the IJF Disciplinary Commission recently announced that Nourine and Benikhlef have been suspended from all IJF events for a period of ten years, subject to appeal within 21 days. 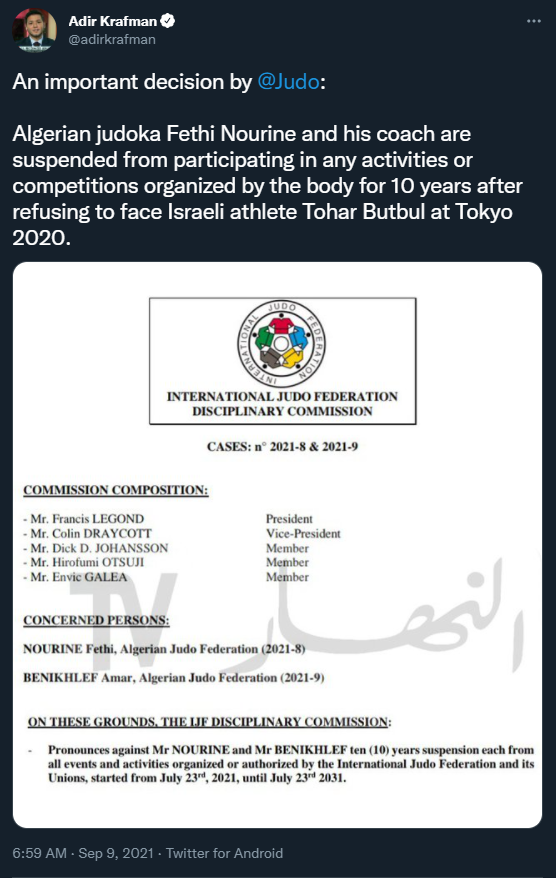 While the BBC has not yet reported that development either on its sports site or its news website, the story has been covered by several Algerian media outlets, one of which reports Nourine’s reaction as follows:

It remains to be seen whether the BBC will produce any follow-up to the story it reported in July and if so, whether its reporting will inform audiences of Nourine’s ridiculous conspiratorial allegations.